So, the Mets signed Hank Blank to a 1-year $1.5 million contract yesterday. The reaction was predictable--déjà vu all over again. And while giving a 38-year-old backup catcher a $1.5MM contract has shades of the Alex Cora deal; remember some key differences between Cora and Blanco that I have outlined in this chart: 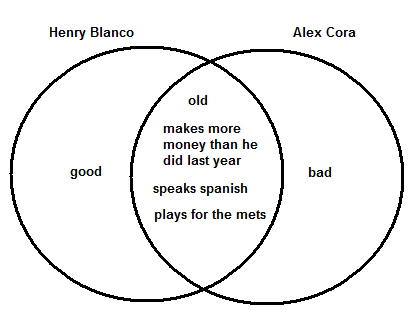 Pretty clearly, the Mets are making a conscientious effort to sign their backups earlier this year. Probably realizing their bench depth has lacked in the past few seasons, whoever is running the team has to decided to leverage their financial advantage to handpick their bench players this season. We speculate, as fans, that no other organization could possibly have wanted Alex Cora or Henry Blanco for that much money, which could be true, but maybe beside the point. After I complained last season that the Mets don't pay attention to who they put on their bench, the Mets went out and got one of the better backup catchers in baseball.

But the Cora deal didn't make financial sense! Surprise, the Mets don't evaluate major league talent well, what a revelation. That doesn't change the reality that, instead of signing Cora and Cory Sullivan in late January, the Mets are bidding in late November, early December on players that might not make the major league roster. It's a change, and I think it's a good one, Henry Blanco being the first good thing to come from it.

Whether or not this leads to the team to sign anymore decent bench players, who knows, I don't trust them to do anything right. In theory, however, I like this strategy. Considering how much I've stressed the importance of good bench players, big-market teams would probably do well to spend a few extra million to get the best backups. When we say Player X could be easily replaced by some minor leaguer, and is thus not worth his contract, it's usually because Player X stinks, not because all benches should be built from players in the minor leagues. As evidenced by the past few seasons, the Mets simply don't have the talent to build a bench from the minors.

Who, right now, can step in from the Mets system to replace Blanco's production as the backup? Josh Thole? The team clearly wants him to develop more in AAA, and I don't blame them. Thole's skillset doesn't translate well to backup duties anyway. In a small amount of PA, his BABIP-fueled offense could be very erratic, and he doesn't have the fielding ability to carry a slumping bat off the bench. Omir Santos? No. Omir Santos' career year offensively last year was below the production of the 37-year-old Blanco. Defensively, Blanco is in a whole different universe than Santos. Santos demonstrated good receiving skills, but a pretty weak arm, and erratic plate-blocking ability. Blanco is the whole package. Santos also hit nothing but fastballs last year, which isn't exactly the hardest thing for opposing pitchers to adapt to. Blanco has a more stable offensive skill-set, with his good plate discipline.

Focusing more on Blanco, he should be well worth $1.5MM, even if he only gets ~150 PA. Bill James' system projects a .284 wOBA, and while I usually find James projections too optimistic, that seems reasonable, a .30 point regression from last season. Defensively, he's probably +10-20 run catcher per 150. Last season, using the best catcher defense estimates available, he was about ~2 WAR ($8MM-$10MM value) for the Pads in 232 PA. He's like the Adam Everett of catchers.

I like this deal, and I like Blanco. Really, it's the best value signing the Mets have made in a long time. I understand the feeling that it's just another big contract for an old player, but that's not really the case here. We paid our last backup catcher, Ramon Castro, $2 million, and Blanco is just as good and certainly more durable.