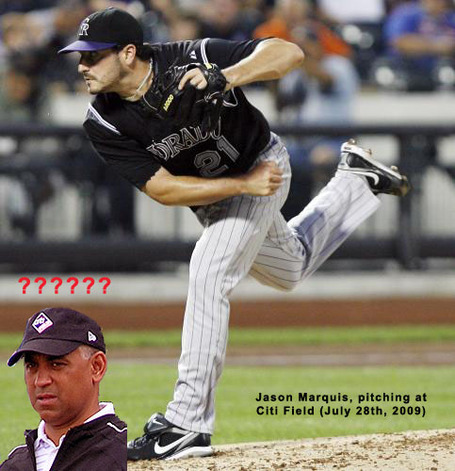 Among the general fanbase, and some TV/newspaper/radio "pundits", there has been a growing call for Omar Minaya to sign Jason Marquis, who is a free agent this winter. Rumor is that, supposedly, Omar has met with his agent(s), or is ready to. Marquis has already stated that he wouldn’t mind playing for the Mets, Jeff Francoeur thinks that he’d be a great fit on the team, and an added plus, he’s a local guy, having grown up in Staten Island. He made the All-Star Game in 2009, and much is made about the fact that every team he’s pitched on has made the playoffs. Let’s debunk some of these things right now.

Firstly, let’s talk about all of the teams that Marquis has played on being in the playoffs (from 2000, to 2003, he played for the Braves; from 2004, to 2006, he played for the Cardinals; in 2007 and 2008, he played for the Cubs; in 2009, he played for the Rockies.). In ten seasons, each of which Marquis has played on a team that got into the postseason, Marquis only actually pitched in five of them. He pitched in 2001, with the Braves, 2004 and 2005, with the Cardinals, 2008 with the Cubs, and 2009, with the Rockies. And in those seven series he appeared in, he only actually started three of them (compiling a postseason ERA of 4.56, and a postseason WHIP of almost 2, in 23.2 innings). If Marquis’ abilities as a pitcher had that much of an impact on the teams he played on making it into the postseason, why was he left off of the roster so many times, and pitching poorly when he did get into games, either as a starter or as a reliever? This is obviously telling of his true ability, as opposed to the luck of the draw, in being on teams that win. Invoking this reason as a factor for signing Marquis has no substance to it.

Now, about the fact that Marquis grew up in New York, and is a local guy. That is nice and all, that, being a local guy, he wants to play for a local team in the Mets, but…All of those fans, or sports writers/’pundits’ out there who want him because of this reason do realize that Marquis grew up a Yankee fan, right? Now, that’s no character flaw against him or anything (Ed Kranepool grew up a Yankee fan, and he is synonymous with Metsdom today, of course), but that’s no reason to go after him. Texas is a big state, with a lot of baseball players hailing from there. Should the Texas Rangers, or the Houston Astros feel that it is in their best interests to sign as many players born in Texas, simply because they grew up in Texas? Invoking this reason as a factor for signing Marquis has no substance to it.

A pitcher who faded in the second half of the season, especially in September…That sounds like a recipe for success for the Mets. I mean, it’s not as if strong September performances by the club would have given us a playoff berth in 2007 and 2008, right? Jason Marquis has exhibited a downward trend in the second half of the season over the course his career numerous times. On a team that has been plagued by this type of phenomenon over the last couple of years, is adding more fuel to the fire really all that great of an idea? How confident would you be in an ailing Mets team in September when Jason Marquis, with a career ERA of 4.93 in the month of September?

Well, Citi Field is a much better pitcher’s ballpark as compared to Coors Field, so Marquis is likely to have more success in Queens, right? Odds are, not really. Jason Marquis is not a fly ball pitcher, meaning that the lower altitude and larger outfield in Citi Field will not impact his style of pitching all that much. As evidenced by his 4.79 K/9 rate last season (5.32/9 over his entire career), Jason Marquis is not a power pitcher. Given that he throws his sinking fastball almost 65% of the time, he is a groundball pitcher. So is Mike Pelfrey, and the impact of Luis Castillo’s diminishing range, and whoever the stand-in at shortstop was very evident in 2009. In 2010, Luis Castillo is going to be a year older, and his range a bit smaller, by virtue of growing older. If all goes well, Jose Reyes should be back and healthy, but Reyes can only cover so much ground. Everything else is left up to Luis Castillo, who leaves me feeling less than confident about Marquis suddenly "finding himself", at age 31.

Is all of this an indictment against Jason Marquis? I don’t feel that it is, no. In another place, another time, I wouldn’t have so many reservations against signing him. But, the fact of the matter is that, as the team seems to be shaping up as of right now, Marquis isn’t the best fit. He really wouldn’t even be a very good fit, at that. If Mike Pelfrey gave me more confidence as a front-of-the-end pitcher- ignoring the defense behind him, that made him appear worse than he actually was in 2009- maybe. If the Mets had a more capable player at second base, maybe. If the back-end of the rotation weren’t already so stacked- as it is, we already have John Maine, Oliver Perez, and possibly Jon Niese, Nelson Figueroa, Pat Misch- maybe. If he was willing to sign a contract with the Major League minimum, maybe. But, that’s a lot of ‘ifs’, and ‘maybes’, so I’ll just have to take a pass with Jason Marquis.

In writing this, I’m pretty sure that I’m preaching to the choir. But, my goal of this is to attempt to reach out to those who think signing Jason Marquis is a good idea, just because they’ve heard it on the radio, or on TV, or on the same blogs where people advocate signing Bengie Molina, and not signing Matt Holliday, and demonstrate to them, contrary to what they’ve heard, Jason Marquis is not that big of a deal, and would be a mistake in the 2009-2010 off-season.