John Maine's 2008 showed promise but ended in disappointment. His fastball looked sharp, dialing up to 95 consistently, averaging 94. After his first 100 innings, however, Maine struggled. He battled a strained rotator cuff, causing his walks to balloon and his fastball's velocity to steadily drop.

The injury wasn't a red herring, either. He stopped throwing his slider almost entirely, and as a result, pitched more to contact. His changeup is not as good as his slider and not a sufficient out-pitch.

Over the offseason, doctors removed the biggest bone spur in Major League history from Maine's arm. John claims to be 100%, and he's already throwing in Port St. Lucie.

Assuming then, that he's full strength, there is plenty of reasons to be optimistic about Maine's season. If he throws his bendy pitch more often, his strikeouts should increase and his LD/GB/FB rates (pictured below) will normalize, allowing him to take advantage of Citi Field. 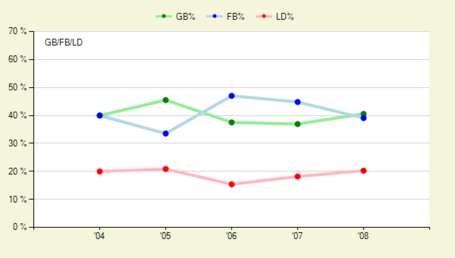 Will Carroll's Team Health Reports list John Maine as red, or the highest level of injury risk. That should be no surprise, as Mets fans have recently seen how debiltating rotator cuff injuries can be. He's a big injury risk in 2009, but Maine could be a solid #2 by midseason.