LHP Will Ohman is expected to sign soon, and the Mets may be one of four teams with an offer out. Before we look at Ohman, however, consider who currently will be competing for spots in St. Lucie:

The first five are locks, leaving seven healthy pitchers to work for two additional slots. Those seven, however, are all righties. With that in mind, adding another lefty, who can get batters out on both sides of the plate, makes sense. The incumbent left-hander, Feliciano, used to fill this role, but after being treated like a LOOGY, he started to act like one. 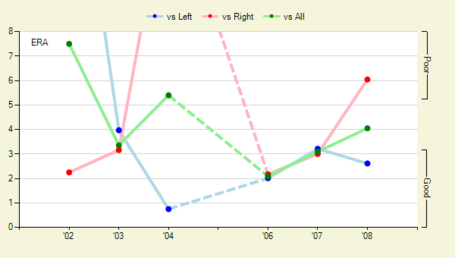 Ohman exhibited a somewhat opposite phenomenon last year. Although he didn't display the two-way abilities of Feliciano's '06 and '07, he made strides to drop the LOOGY label: 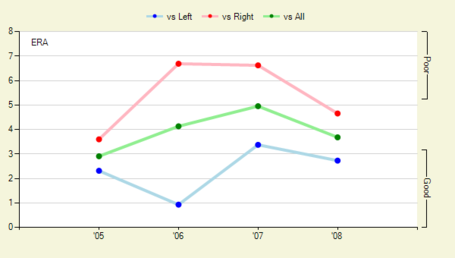 He's also a pretty good pitcher. Ohman posted FIPs of 3.87, 3.90, and 3.17 in the last three years. Last year, he was especially good as suppressing  homers and especially bad at stranding runners. He's a good bet for a FIP somewhere between 3.50-3.90 next year, with some upside. In the Mets bullpen, he could very well be the third-best reliever. At the very least, he's way better than Schoeneweis for what look to be a fraction of the price.