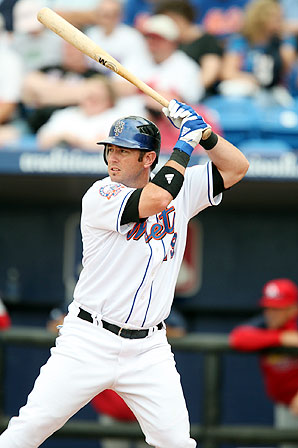 Unless he asserts himself as the far superior player, Ryan Church's career as a Met will be forever tied to Lastings Milledge's career as a National. Although interesting, this comparison is unfair to both players and since Ryan wears the laundry, let's focus on him.

Church's Met career started well. Finally out of a bad situation in Montreal/Washington, where he was benched for Willy Mo Pena, among other scrubs, Church shined with the bat and in the field. Through May 18th, Ryan was hitting .307/.379/.542 with 9 homeruns. Suddenly, Minaya was a genius. Then on May 20th, Yunel Escobar's knee struck, handing Church his second concussion of the year. He spent nearly a month on the disabled list, came back too soon, and had to spend even longer out, ultimately not returning until late August. He hit only 3 homers the rest of the year and finished .276/.346/.439.

So, to what extent was Church's disappointing second-half injury or just the real Ryan Church? It's impossible to say. Still, the player who merely filled out the lineup in September certainly was not the same offensive presence from April/May. In that respect, Church is an enigma. Many Mets fans, perhaps with some right, hope for a player drastically better than any sophisticated projection system sees coming.

What we do know is that Church fields very well. He boasts a career 10.3 UZR/150 in RF for his career. Although his numbers didn't quite approach that last season, his injury could again be partly to blame.

So don't expect the world from Church in 2009, but remember what he's capable of. And, in case you were wondering: 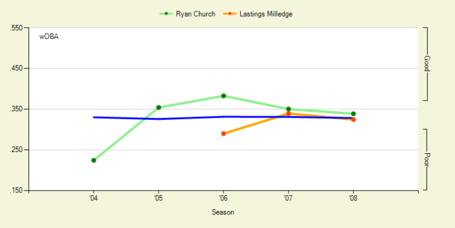