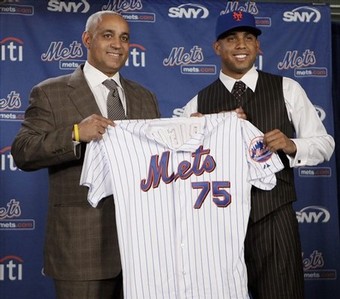 If you haven't seen a report card for the Mets' offseason yet, expect a few hundred in the coming weeks. Unfortunately, many writers determine these grades subjectively, much like "power rankings." The number of times the phrase "biggest need" or the number 62 will appear in said pieces figures to be astronomical, so that's the the last time you'll see either in this article. Instead, I've tried to inject some objectivity into the process. Next to each name will be a his projected WAR (what's this?) with the Mets, giving us an idea how many wins were gained or lost. The transactions are grouped for some context.

The Francisco Rodriguez Signing: B+

Minaya's first move turned out to be a pretty good one. The market for relief pitchers had completely collapsed by the time Rodriguez signed and the Mets got something of a bargain. Although some people would never advocate paying a closer double digits, that 2.7 projected WAR equates to roughly a 13 million dollar market value. Just beware when his 17.5 million dollar option for 2012 vests. Yikes.

After the last two season, I won't trivialize the importance of one win, but that's a hell of a way to get one. The real kicker in this deal is Endy Chavez who actually did project be one win better as a Met than Jeremy Reed does. If the Mets had held onto Endy, this deal probably would have been the big win many think it is. As it stands, however, it's another great addition to the bullpen and lesson learned about the value of defense.

The money and the context make this one so bad. To be worth his 12MM per, Oliver must be a 2.5 win player each season, which, while possible, is unlikely. This grade also accounts somewhat for the move not made. The Mets signing Derek Lowe (3.6) seemed like a virtual certainty, shortly before he signed with the Braves for 4/60. The Derek Lowe v. Perez debate is tired now, and we've talked ad naseam about why Perez is overrated. Simply put: you don't lose out on 2.3 wins for 3 million dollars. Hopefully, Oliver proves us wrong.

The Schoeneweis Trade: B

That's no math error, that's the beauty of this trade. Since someone who isn't Connor Robertson will likely take Show's spot in the bullpen, the Mets can be assumed to gain at least half a win from this trade. There's no downside to a move like this, but it can only be a "B", because it was so painfully obvious.

The Redding and Garcia Signings: B+

Those WAR projections assume Redding does long-relief and starting work, while Garcia does about 100 innings of starting before his arm falls off. That's the best part of these signings too, the depth. This year the Mets, stacked 3 deep at 5th starter, should be able to avoid the Brian Lawrences of the world. Both Garcia and Redding are signed reasonably and both have some upside.

Swapping Easley for Cora is just swapping two over-the-hill backups with opposite skill sets. The Mets could have just kept Argenis Reyes on the bench for minimum wage and gotten the same results. Not a big deal.

What a waste of money. These two are a combined -30 UZR in center and neither can hit. I don't even want to calculate their projected WAR, because if either makes the team the grade becomes a double-F-triple-minus.

This offseason gets the job done. For the third season in a row, the Mets are the best team in the NL East on paper. Depth in Left is always concern, but maybe this year F-Mart finally grows up. Ultimately, it was an offseason of necessary moves and missed opportunities.