Many complained last year as Luis Castillo batted .245 and played listless defense. That same Luis Castillo will probably start the season as the Mets' starting secondbaseman. Surprisingly though, that's not necessarily a bad thing. His low batting average can be mostly attributed to his lack of speed, as his BABIP dropped about 60 points despite his LD/GB/FB rates being nearly identical from the year before. Castillo's OBP somehow hovered around his career mark, thanks to this silver lining: 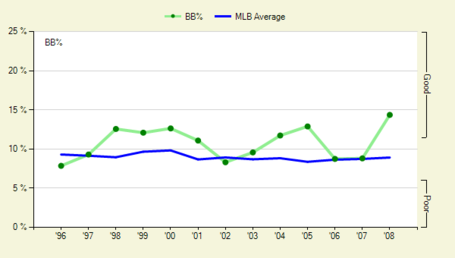 His sudden loss of fielding ability also stemmed from agility issues. Actually, assuming Luis makes a modest comeback in both areas, he could be a useful player in 2009, worth his 6MM, believe it or not.

His potential comeback, though, seems largely contingent on his ability to stay healthy and in shape, as promised. Which reminds of an old saying in Tennessee — I know it's in Tennessee, probably in the Dominican Republic — that says, fool me once, shame on — [pauses] - shame on you. Fool me — I can't get fooled again.