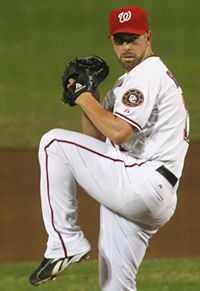 A little while ago, the Mets extended a $2.5 million contract offer to Tim Redding, which he accepted. At the time, it was assumed the Mets would add another starting pitcher, most likely on a far more lucrative deal. For this reason, I declined to take a close inspection of Redding and what he might be. While its still likely that the Mets will add an arm, its only two weeks until pitchers and catchers, and perhaps its time to submit Mr. Redding to a bit more scrutiny.

Just glancing at Redding's basic career numbers, there's not much to get excited about. His 4.95 ERA in 2008 was right in line with his career mark, and was well supported by a 5.93 K/9, 3.21 BB/9 and 1.43 WHIP. His FIP of 4.93 agrees with his ERA extraordinarily well, essentially meaning the Nationals gave defensive support that was almost exactly in line with the league averages. This idea is further driven home in his .299 BABIP. Based on this data, it appears 2008 was a very accurate representation of what Tim Redding is.

There is an interesting dimension to Tim Redding that gets overlooked, however, because its not really one you'd expect to stand out with such a mediocre NL pitcher. According to BP, Redding had the 12th most difficult schedule in all of MLB by Quality of Opponents OPS (min. 150 IP). Tim Redding actually seems to somehow have faced tougher competition than guys like Josh Beckett, Zack Greinke, Daniel Cabrera, Mike Mussina, James Shields, and Daisuke Matsuzaka. Not only that, but if you go down the list of pitchers who had the toughest schedules in MLB by opponents' OPS, you have to go all the way to 36th just to find another NL pitcher. The aggregate OPS of all of Tim Redding's opponents was an astounding .014 higher than any other pitcher on the Senior Circuit. Here's how the 10 toughest NL pitcher's schedules by opponents' OPS looked by comparison:

If you play around with the various sorters on BP's stats page, you find that Redding not only had the toughest schedule by opponents' OPS, but also by each of AVG (tied with Olson), OBP, and SLG. You also find that the greatest disparity was in Redding's opponents' SLG. If you were to graph all the NL pitchers in this regard, Redding would be way off on his own, a monster deviation from the rest of the field. It seems that a combination of bad luck and the fact that Redding pitched in the most offense-heavy division in the NL lead to this result. While he may be staying in the NL East with his move to the Mets, he will not be facing them anymore, and instead facing his former team, the punchless nationals.

This is all reflected in Redding's SNVLAR as well, which stood at a solid 3.2 last year. That puts him ahead of other "innings eaters" such as John Garland, Jason Marquis, Andy Sonnanstine, and Joe Blanton, as well as just a bit behind Javier Vazquez, Gavin Floyd, and Randy Johnson. If you also consider that Redding should get a boost in having an improved defense behind him, he might actually be a bit more useful than most of us (myself included) have been anticipating. Its still hard to see him being much more than average, but especially at $2.5 million, this may turn out to be a rather shrewd signing by Minaya, and a great bargain even in this market.

I did a little more playing around with Pitcher's quality of opposition as well. Here are some other NL Notables:

And by contrast, here were some of the NL's easiest schedules by quality of opposition:

Johnson marks the easiest schedule among all NL pitchers with at least 150 IP. His opponents had an aggregate OPS .052 lower than Redding's. Its also pretty clear that the NL East is the best offensive division in the NL. 5 of the 10 hardest schedules in the NL were for pitchers in the East, as well as 11 of the 20 toughest.