Jose Reyes Gets Picked Off

Share All sharing options for: Jose Reyes Gets Picked Off 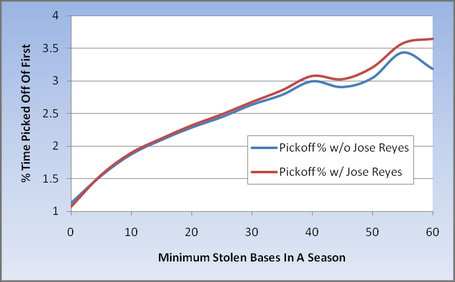 The x-axis represents minimum stolen base seasons for individual players. For example, '0' includes every player season ever, '10' includes every player season with at least ten stolen bases, etc. The y-axis represents the frequency of pickoff, which is just times-on-first)/times-picked-off. I roughly estimated times-on-first to be 1B+BB+HBP, which doesn't include times reach on error or catcher's interference, etc., but it's close enough for funk. The pickoff stat I used might include times picked off of bases other than first, but those occur so infrequently as to render their inclusion almost meaningless. It doesn't include pickoffs that result in the player being tagged out at second since those are counted as times caught stealing.

The red line is the frequency with which major leaguers since 2000 have been picked off first. The blue line represents the same exact thing with the exclusion of Jose Reyes seasons.

What's clear is that Reyes gets picked off a lot. That the lines diverge as stolen bases increase is not surprising. If we already grant that Reyes gets picked off more often than the average player, his elevated pickoff rate will be weighted more heavily as the relative population size decreases (i.e. many fewer players have stolen 60 bases in a season than have stolen 30 or 20 or 10. Case in point: there have only been nine total 60+ stolen base seasons this decade and three of those were by Reyes himself). None of this is to say that Reyes is a bad baserunner or a bad base stealer, but it does illustrate that he may be a tad cavalier about the value of having a runner on first base versus no such runner.