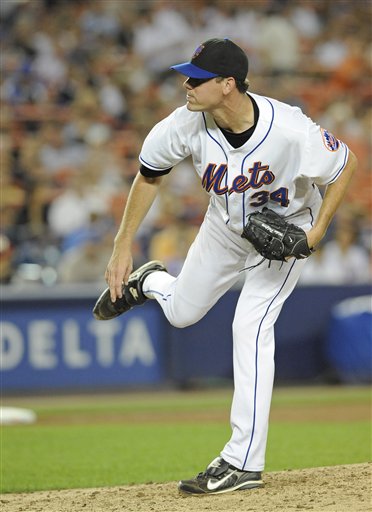 Through his first nine starts of 2008, Mike Pelfrey had disappointed with the following line: 49 IP, 63H, 23 K, 24 BB, 5.33 ERA. No matter how much your fastball sinks, no one can be successful walking more batters than they strikeout. Pelfrey's season seemed doomed: he hadn't shown any genuine improvement and was running out of time to get it together.

Then, in a span stretching from May 31st to the end of the season, Pelfrey put up 146 H, 87 K, and 40 BB in 151.2 innings. Perhaps never before had a season been so distinctly bad for exactly the first third, then great for the rest. His performance firmly established himself as the Mets' number 2 behind Johan Santana, just months after talks of demotion had returned.

Pelf threw 61.1% of his pitches for strikes in those 150 glorious innings, compared to 60.2% earlier in the season. That's a nice improvement, but clearly something else happened to transform his K/BB from  0.96 to 2.18. The most notable change was increasing his already high percentage of fastballs thrown to 81.2%, compared to 72.8% in 2007. This fastball increase traded off with his changeups, which accounted for just 5.1% of his pitches in 2008, versus 13.7% in 2009. Fantastic in-season pitch f/x analysis of Pelfrey's transformation over at Driveline Mechanics also found Pelfrey had traded in some of his fastball's movement for velocity. Whether this trade was the result of more fourseamers, harder twoseamers, or both, clearly Pelfrey was benefiting from having two legitimate looks from his best offering.

Take one particularly effective start against Houston on August 25th for example. Pelfrey threw 9 innings; allowed one run, six hits; struck out 6 and walked none. The graph below shows his pitch selection from that night, plotted on vertical movement vs. speed: 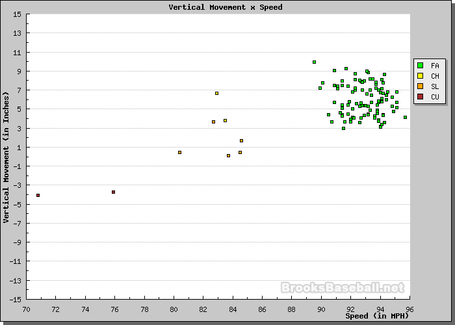 Pelfrey threw his fastball with a great variety of velocity and movement, demonstrating the versatility of the pitch and how he could use it so effectively. This graph also shows his resurrected curveball, although he threw it only twice.

Pelfrey's transformation seems genuine, but how much, if at all should he be expected to regress in 2009? One thing going for him is the expected improvement of the infield defense. Castillo could be in line for a big rebound, and even if he's doesn't, Alex Cora's defense should be substantially better than Damion Easley's at second. Reyes also had something of a down year defensively in '08, and this year looks to be crucial in determining his true talent in the field.

Pelf's biggest knock is that he doesn't miss many bats. But his O-Swing %(a measure of swings induced at pitches outside the strikezone) improved last year and with a legitimate second offering, he'd be filthy.

He also improved his ability to turn line drives into grounders and flyballs. With more consistent success with his sinker he could become an even bigger ground ball pitchers, as he looked like an absolute ground ball machine at points last year: 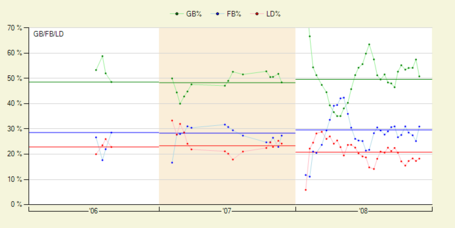 With those factors potentially in his favor then, the biggest concern for Mike is his health. Peter Bendix identified him as the prime candidate for injury based on the Verducci effect for young pitchers. He wrote:

Mike Pelfrey (146 IP last year, 200 this year – 54 inning increase). Pelfrey is a prime candidate to be a victim of the Verducci Effect. I can’t fault the Mets for the way they used him in 2008, since they were in a heated playoff race and Pelfrey was very effective. However, he threw many more innings than he ever had, making it fairly likely that Pelfrey will experience an injury and/or ineffectiveness in 2009. It’s far from a certainty, but if I was a Mets fan, I’d be very worried.

Pelfrey claims he feels fine after a big increase in innings last year, but of course he does. At this point, we can only hope for his health. Maybe the additions of Redding and Garcia coupled with the health of Maine will take some pressure off him, but who knows whether Jerry Manuel shares these concerns.

Dan Warthen wants to make Pelfrey back into the pitcher the Mets drafted, which hopefully means developing his curveball into a useful pitch and not re-emphasizing his changeup. Regardless, there's a lot a room for equal parts optimism and caution toward Pelfrey's 2009.