The five starting shortstops of the NL East are an impressive bunch. The top three conjure memories of the A-Rod/Jeter/Nomar trio circa 1999, albeit with different skill sets. Here are their 2008 runs above replacement, comprised of Fangraphs WAR components plus Baseball Prospectus's baserunning stats. I tried to match each player to his team color, so my apologies if the graph isn't so easy on the eyes.

The NL East boasted the three top shortstops in all of baseball last season, and five of the top seven in the NL. Here is a brief look at each heading into the 2009 season:

Ramirez was behind only Albert Pujols and Chase Utley in WAR this past season, and somehow wasn't in the top ten in NL MVP voting (neither was Utley). Given Pujols and Utley's injury concerns, there is a strong possibility that Ramirez will be the most valuable position player in baseball in 2009. However, CHONE's defensive projections aren't kind, as he's pegged at -11 for the upcoming season. If he reverts to his awful 2007 defensive showing, there's a chance he'll change positions in the near future.

For all the flack Reyes catches because of his recent September swoons, he's been one of the best all-around players in baseball since 2006. Only Ramirez has been a more valuable shortstop during that span. One concern is the 158 games per season he's averaged since 2005. Hopefully this doesn't catch up with him anytime soon. As exciting as his stolen bases are, I think all the running he did in 2007 and 2008 was at least partly to blame for his poor showing down the stretch. Putting the reigns on Reyes's running game might not be a bad move early in the season.

Public enemy #1 for many Met fans, Rollins's home run power surge during 2006-2007 looks kind of fluky given his HR/FB% during that span. Even if his offense declines in the coming years, he'll still be a force on the baseball diamond because of his consistently excellent defense. I'd be thrilled with a .200/.300/.325 line from Rollins, but the projection systems peg him at about .280/.340/.460.

Given his career minor league line of .294/.367/.411 and solid fielding ability, Escobar looks to be a valuable player at a premium position for years to come. He doesn't do anything exceptionally well, but he does a lot of things decently well. Kind of like a poor man's Barry Larkin. Marcel and CHONE project a wOBA in the high .340's for Escobar, with about 40 extra-base hits.

Guzman's career has seen its peaks and valleys. Just look at this graph of his year-by-year wOBA: 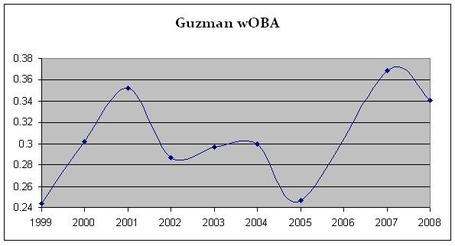 In 2008, his xBABIP per Peter Bendix and Chris Dutton was eighteen points lower than actual BABIP, so he was probably a bit lucky. Jim Bowden might have been wise to work out a trade for some pitching and sell high on Guzman given the shortstop's unpredictable performance. Then again, the Nationals depth at shortstop is not too impressive.