If you've been reading Amazin' Avenue lately, you know we're not particularly enamored with Oliver Perez. This opinion is hardly universal though, due in large part to reliance on statistics like Wins and ERA, which give an incomplete and often misleading view of a pitcher's performance. Omar Minaya and staff, having just lost a bidding war against themselves for Perez, obviously use some if not all these statistics in evaluating players. This failed method can be summarized in a chart courtesy of Paul DePo: 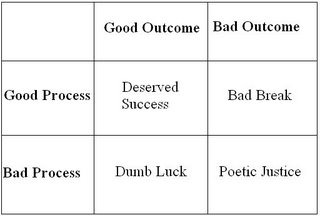 Minaya's offseason thus far has both reflected a bad process in evaluating players and represents a bad process in itself. That's not to say the Mets can only do well through sheer "dumb luck" next year, but Minaya is not effectively working toward a good outcome

Similarly, this chart can represent Oliver Perez's past and future performances and the statistical results of those seasons. Applying the chart to Ollie's '09, we can better predict his results and later interpret them.

Oliver Perez's pitching, barring a breakout similar to his 2004 season, is a bad process. He throws two pitches, a slider and a fastball, with erratic control. He posts high strikeout rates, but also very high walk rates. This approach also leads to large numbers of flyballs and, accordingly, homeruns. Fielding Independent Pitching (FIP), a statistic that attempts to evaluate a pitcher's performance absent factors beyond his control and express a number similar to ERA, uses just strikeouts, walks, and homeruns. Not surprisingly then, FIP depicts Ollie's ERA as deceptive, scoring him at 4.35 in 2007 and 4.55 in 2008.

The difference between his FIP and ERA, then, can be partially attributed to luck, or factors outside his control. Oliver benefits from the help of a good defense, Carlos Beltran's in particular. Beltran handles the many flyballs and linedrives Perez surrenders. This fielding help mostly explains why Perez's BABIP has been relatively low (.280-ish) in his time with the Mets. The latest in DIPS theory suggests pitchers do have some control over their BABIP, with flyball pitchers having a particular advantage. So Oliver should continue to benefit from his defense and will probably again "beat" his FIP in 2009.

Another luck factor, park, will be in flux for Perez and the rest of the Mets' staff in 2009. Will Citi Field help Perez? Probably, but not greatly, as his hittracker plot suggests the depth and location of his homers aren't particularly suited for Citi's dimensions. Still, the thought that "the Catch" would have been a routine flyball on the track in Citi is an encouraging thought.

Most projection systems see Oliver taking a step back next year. Only Marcels projects him to match his ERA from 2008. Needless to say, if Perez posts an ERA over 4.50, many fans and media members will be calling this new contract a total failure. That would be poetic justice, but is not likely given the aforementioned factors. These projections, which assume a spike in HRs and hits, are still possible, however.

Many people hold out hope that the Oliver Perez of 2004 will show up and hang around for the next three years. Although it's highly unlikely, PECOTA gives Perez a 14% chance of a breakout and 58% chance of improvement in 2009. We'll see, but don't be fooled next year. Focus on the process.