Cjmulrain was talking about Rey Ordonez which got me thinking about who would be on the Mets all defensive team. My firsthand knowledge of the Nigh Mets only dates back to the early 90s, so some research is in order. (Skip these lines if you don't care about my method. The problem with feilding statistics are well known but I'm going to use the player's range factor vs the league average for respective position as well as my own personal thoughts.) So, with some Neil Young on my record player and the best whiskey under $30, I present to you the Mets All-Time Defensive Team.

For a franchise that, until recently, couldn't find a third basemen as well as trouble at most every other offensive position, the Mets have been blessed at the catcher position. From Gary Carter to a All-Time single season catcher HR leader to Piazza and even Pratt, 06 Lo Duca and AA favorite Castro, the Mets have had a number of offensive catchers. However, none of these men can match the defensive ability of my pick for the Mets best defensive catcher, Jerry Grote. 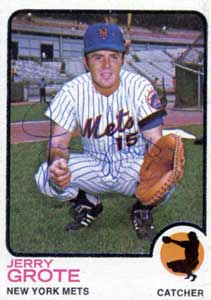 But don't take my word for it, let's get an unbiased opinion from his website/myspace page

"There was never any doubt that Jerry Grote was one of the best defensive receivers in the National League. He always handled pitchers well and had a rifle arm."

After a rough first season with the Mets in 1966 at the age of 23 (he made 11 errors and had his lowest fielding percentage of his career,) Grote established himself as one the best defensive catchers in the league, making the all-star as a starter in 68 with a season line of .282/.357/.349, 3HRs. In the magical 69 season, Grote allowed 31 SB while throwing out 40; Grote ended his career with a 38% caught stealing rate. The dude even played a handful of games at third for the Mets at age 34. Overall, I feel Grote place on the all-defensive team is not debatable unlike some other selections starting with...

This is obviously a two horse race between Rico Brogna and Tim Harkness or maybe between a man with a mustache and a man with a helmet. This is a pretty tough choice, both players were all-time greats and both have a special place in my heart. My pick... 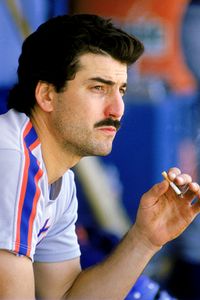 Range factor has Keith at a slight edge with his '87 season being his personal best. The real tipping factor for me was the fact the Mex changed the rule book, or rather, forced umps to enforce a rule already in the book. Keith would position himself in foul territory when receiving pickoff throws from the pitchers. This positioning allowed him to tag the runner faster...that was until his former manager, Whitey Herzog, called him out on it. Plus, I've won a good amount of money betting on pitch selection with my buddies using his advice. Simply put, if Keith was on the Mets now, his combination of a great batting eye and defense would make all of us at AA have a man-crush comparable to Jerry's.

From one of the Mets best positions to one of their worst. Quick, name a great defensive second bagger for the Mets...I'll wait...I'm guessing you sheepishly thought Alfonzo but not too confidently. Looking up the numbers as well as thinking about it, Alfonzo was good at second not great which is all you need to make The Best Infield EVER when the guys around him are fantastic. Anyways, it's been pretty barren for the Mets at the groping over the clothes base. For guidance, my pops always said that my choice was the best defensive second basemen that the Mets  ever had and the numbers seem to back him up. At second base, the human bull's eye 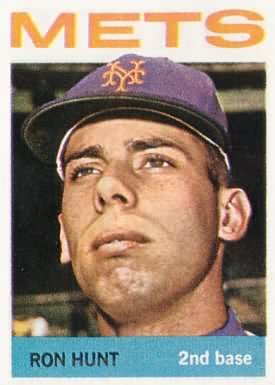 While on the Mets, Hunt was way above average at second base. He tailed off later in his career but that was after he left the Mets. To type any more about him would be disservice to you, read a superior writer's work.

Like I alluded to before, the Mets history is pretty bleak when it comes to third basemen. HoJo was my favorite player as a kid but was never known for his D. Wright has made some great plays at third but isn't quite there yet. [Spoiler Alert] My selection will be the lone representative from the Best Infield Ever! 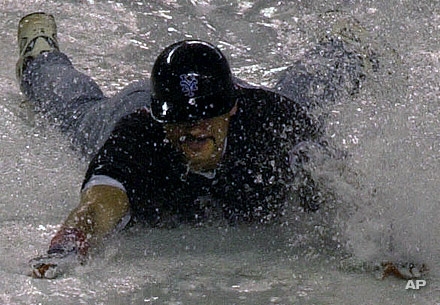 Ventura only spent three seasons, but damn could he pick it. He had a number of errors but a number of them came from balls he had no business being able to field in the first place. A key cog of our black uni championship runs.

So, I didn't pick Ordonez, then who did I? 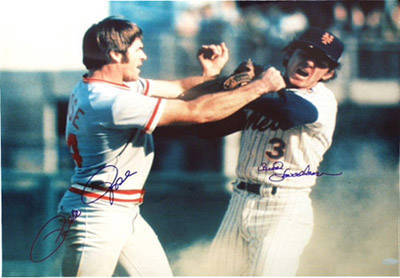 Bud Harrelson was an average SS over his career and had a couple of pretty good seasons with the Mets in his mid to early 20s. So, why not Rey-Rey? While Rey made absolutely spectacular plays, he's kind of like Jeter, wait, don't leave hear me out. Jeter has one main play, the one where he ranges to his right, grabs a grounder and makes a leaping throw to first. It looks good but that's basically it for Jeter. Ordonez had a similar trademark, he would range right, slide, plant and throw. It looked awesome, (Rey, had other moves as well) but the fielding numbers show Ordonez as average, nothing more or less. His stature is mostly due to highlight reel plays, but I can remember that he would botch some real easy ones as well. Harrelson on the other hand, was solid but unspectacular, which is boring but, according to the numbers, makes him better than Rey-O. I understand if you disagree, tell me in the comment section. 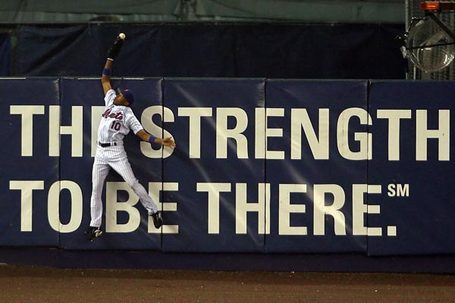 This is also obvious, Bernard Gilkey sans that one play where a flyball was hit to him and he didn't even get his glove up, I shit you not, the ball actually hit him in the head. Enough, for real, it's this hunk of man.

I don't care what the numbers say (Yes, I do, and they say he's awesome) just watching Beltran play I know no one is better than him. It's been said over and over but everything he does looks so effortless, just gliding under balls that Jim Edmonds would dive for, gracefully covering for Floyd, Green, Alou and Diaz. That catch in Houston on that stupid incline in extra innings was clutch. I hope all Mets fans realize how special what they're watching is.

I kind of just assumed Strawberry would be here but his numbers are pretty bad. In fact, it took me a while to find any worth anything playing RF for the Mets. (To be fair, Shinjo's 2001 in RF was pretty good) That was until one man stood above the shit. 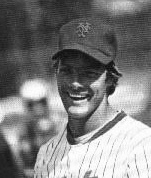 Eric covered Joel Youngblood here, As Eric, mentions, Youngblood was a utility player that could never really shake off the label. The number speak well of his play in RF, really well actually and with little competition I'm sticking to it. It's a fitting end to my post about all-time Mets players that the best RF was a utility player, no one said being a Mets fan was easy.