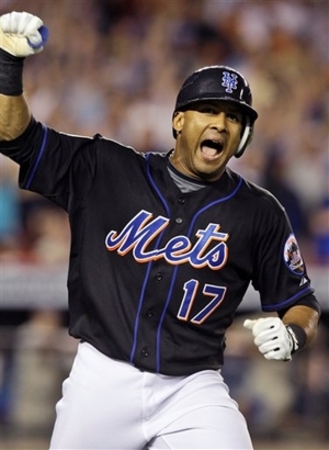 When listing the Mets needs prior to 2007, "retired third basemen" probably ranked near the bottom, somewhere between "El Duque's other foot" and "basketballs." Still, Omar wanted to complete his collection of '03 Expos, Fernando Tatis wanted to build another church, and a deal was made.

Then, after one and a half years in New Orleans, 33 homers, and 33 shuffle-steps across minor league home plates, Fernando Tatis assumed leftfield for the Mets, eventually joining Daniel Murphy in a platoon.  He finished with a .297/.369/.484 line, one of the more pleasant surprises of the Mets' season.

Next year, he probably won't repeat that line. His plate discipline won't permit another .290 average. Citi might also cause him trouble; Hittracker shows 7 of his 11 homers last year being "just enough" or "lucky." Minaya claims Tatis and Daniel Murphy will platoon in left, and hopefully Tatis will get the short-end of that platoon. Regardless, Tatis could be a useful righty of the bench, and maybe lightning strikes twice.