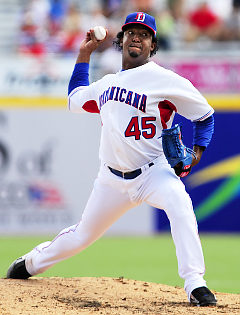 A few weeks ago, the Mets' fifth starter forecast was mostly Garcia with a chance of Redding. When the Mets signed Tim Redding to a guaranteed major league deal back in January the odds were good that he'd fill out the rotation for them. Heck, it looked like a pretty good deal for the Mets at the time. Then the Mets beat out a half-dozen other teams in their pursuit of Freddy Garcia, who was inked to a minor league deal with plenty of major league incentives. While Redding seemed a lock for the fifth spot in the rotation a month earlier, we heard whispers that Garcia might be in the best shape of his life and poised for a triumphant return to form.

The Mets added even more pitching depth when they signed Livan Hernandez to a minor league deal and invited him to spring training. We all laughed at the time, and for good reason: Hernandez is fat and had a 6.05 ERA in 180 innings last season, splitting time between Minnesota and Colorado. We're still laughing, though it's more of a nervous chuckle than the hearty belly laugh it was a few weeks back. Hernandez hasn't been anything special so far, but he has kept the ball on the ground and in the park, and the fact that he's a Proven Veteran™ has to be appealing to Mets management if nobody else.

Then there's Jon Niese, who many think could be every bit as good as Hernandez, Garcia or Redding for a fraction as soon as this season. Niese comes with the added bonus of being a homegrown player, which doesn't add anything to his tangible value but would serve as a feather in the cap of the Mets' player development team. It's also nice to give the kids a shot to succeed rather than always relying on more experienced -- and often inferior -- "known quantities". Niese struggled in limited playing time with the Mets at the end of 2008, but he's their best pitching prospect and I know most of us would rather he get a shot than watch Garcia or Hernandez give it up every fifth day.

And then there's Pedro Martinez, who remains unsigned and pitching with the Dominican Republic in the World Baseball Classic but has expressed interest as recently as yesterday in a return engagement with the Mets.

"Yeah, I would like to be back (with the Mets). But I'm not just gonna follow the Mets. They have their own plans and they have their own thought process," said Martinez. "Yes, I would love to go (to Citi Field) and hopefully have the same success I had at Shea. Shea was a great stadium for me. I hope the new Shea pretty much follows up on the old one.

But I have my goals and I have my things that I want to achieve in life. If it's not with the Mets, it will be with someone else. But if they want a fifth starter who's been there - I don't know how much they want me - I'm available."

Based on an average projected ERA of 4.75 (mean of PECOTA, CHONE, Marcel and ZiPS), here are Martinez's expected contributions in WAR for a range of innings pitched:

I'd bet that Martinez would sign for somewhere in the $3 million neighborhood, particularly if he's as keen on pitching for the Mets as he seems to be. He has four strikeouts and just one hit allowed in three innings pitched so far in WBC action and, while he certainly isn't facing the Phillies or the Cubs out there, if he continues to pitch well and the Mets' current fifth starter candidates continue to founder, Pedro's return to the Mets becomes increasingly more likely. Beyond that, he probably makes sense as an insurance policy should Mike Pelfrey or Johan Santana suffer a setback between now and opening day.