K-Rod's 62 save record masked the worst season of his career in 2008. Due to declining fastball velocity, he induced fewer swinging strikes, and accordingly, fewer strikeouts. Francisco claims he sacrificed the velocity to work on his changeup (whatever that means), but he'd be better off trading those chaneups in for more heaters and sliders.

Whether or not his velocity rebounds in 2009 will likely determine his relative success, but even the 2008 version of Frankie would be miles ahead of anyone the Mets used last year (post-Wagner). Even though he likely won't face many pitchers, it will also be interesting to see how he pitches in the weaker league. While control has never been a strong suite, Rodriguez is one of the few pitchers who can absolutely blow hitters away: 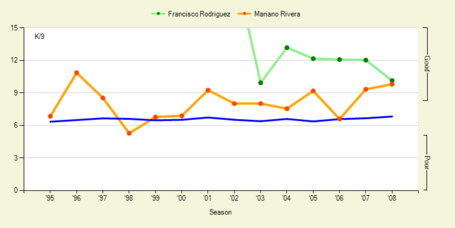 As a bonus, he likes to yell and celebrate extravagantly, which should give the Phillies and the people who cover them more of nothing to complain about.