The Best Infield Ever

A statistical look at the 1999 Mets: "The best infield ever."

Share All sharing options for: The Best Infield Ever 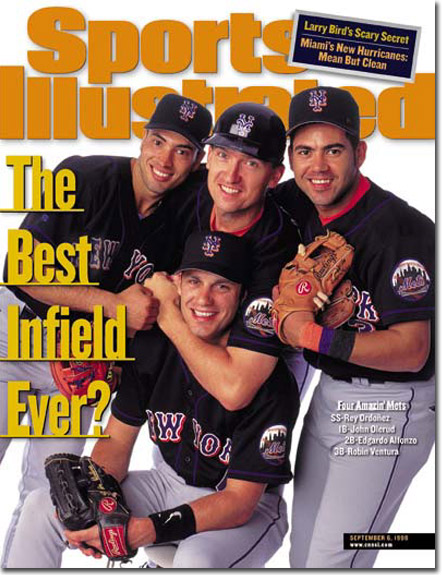 Sports Illustrated famously proposed that the 1999 Mets infield of John Olerud, Edgardo Alfonzo, Robin Ventura, and Rey Ordonez might be "the best infield ever". The quartet committed just 27 errors combined (best all-time), and boasted Gold Glovers in Olerud, Ventura, and Ordonez. However, we know that there is a lot more to assessing defensive acumen than errors and highly subjective Gold Glove Awards. Range, throwing arm, and double play turning ability are also important. Dependable defensive statistics include the relatively new UZR and +/-, but these are only available for recent seasons. Enter Sean Smith's TotalZone (TZ). It is a reliable, but not infallible, stat for determining how many runs above or below average a player is worth with his glove. Smith's WAR database provides the TZ runs plus double play runs (DP) for every player from 1955-2008, also known as the "Retrosheet Era". Here are the Mets runs saved above average in 1999:

This is truly incredible. 81 runs. That left side of the infield was impenetrable, and the "worst" of the bunch, Alfonzo, saved more runs above average than anyone from the 2008 Mets infield. While looking over their career numbers, I noticed something which the following graph of our foursome's defensive runs from 1996-2002 visually demonstrates: 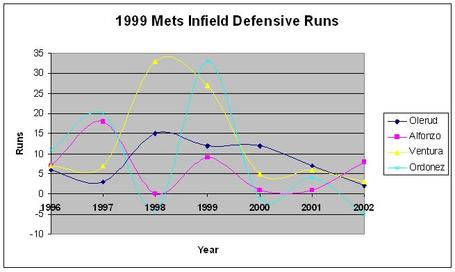 In 1999, Ordonez had the best season of his career, while Olerud, Alfonzo, and Ventura had their second best seasons. What awesome timing for Al Leiter, Rick Reed, Orel Hershiser, and the rest of that Mets pitching staff. The outfield that season was less than stellar, with Brian McRae, Roger Cedeno, and Darryl Hamilton the primary offenders. Without the remarkable infield, they wouldn't have sniffed the playoffs.

The 1999 Mets infield was comprised of four gifted defensive players. Coupled with the fact that each had one of their two best seasons, for a year it really may have been The Best Infield Ever.