Forgive me if you've heard this one before.

Beltran said Reyes will "easily" become a 30-homer threat within the next year or two, which, if true, would make him the 49th player in history to join the 30-30 club.

But general manager Omar Minaya said Reyes' physique and overall game are beginning to remind him of a smaller version of a young Vladimir Guerrero, which is a name he doesn't mention lightly.

"Of the five tools, I only started to see the power tool last year, maybe the year before," Minaya said. "Until then I thought he was a speedy guy who was going to be a really good shortstop."

Seriously though, with all the talk of Jose Reyes potentially batting third for the Mets, the Reyes-power hyperbole is strangely absent. Perhaps the New York media, jaded since picking Carl Crawford in the first round of its fantasy league, was quick to point out Jose's 2007 and 2008 totals (12 and 16 homers respectively) as evidence of 2006 (19) being the ceiling not the trend. That logic seems to have taken hold, but a deeper look at the data suggests otherwise. When I interviewed Derek Carty about his statistic True Home Runs, he mentioned Reyes' power drop in an unusual light:

Using these numbers, it looks like Jose Reyes was the unluckiest on the Mets team as tHR saw him as a 19 HR hitter. It's seen him as a 20 HR hitter for all three years we have data for, and 2007 looked particularly unlucky (and we saw somewhat of a bounce back in 2008).

Derek also mentioned, however, that Citi's dimensions may hurt Reyes in particular. Building upon these two ideas, I made a graph using Google Maps and HitTracker that attempts to illustrate the tendencies of Reyes' homers last year: 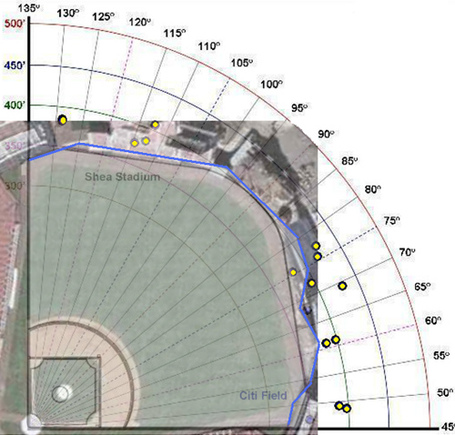 The layout of Shea gives perspective to just how far some of Reyes' shots went. It's also reassuring that only one would have been swallowed by cavernous Citi Field, although a few would have only squeaked by. Then, applying his career data in the same way, we get this: 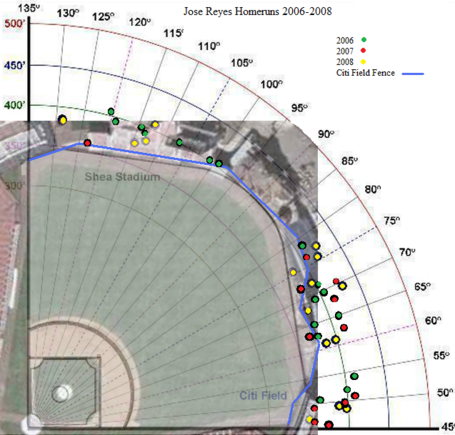 Although Derek mentioned 2007 as his unluckiest year, it features the most Citi-victims on this new map. This graph also illustrates that Reyes' homers tend to land in one of three locations. In Citi, he may make up for any homers lost in right-centerfield with the new rightfield foul pole area. Overall, the graphs suggests Reyes has real power, which will probably survive the new stadium.

Does this mean Reyes could see an increase in power worthy of the 3-hole in 2009? Possibly, but it won't be due to any dramatic change in approach. His very level, line-drive swing will likely prevent him from every becoming a "power hitter," despite his strength. The line drive approach seems best for Reyes anyway, as this Hardball Times piece, written after his abysmal September 2007, suggests. Studeman concludes in that article, however, that groundballs are not the answer for Reyes either. If moving him to third spot signifies Manuel cutting out all the attempts to make Reyes believe "his game" is to be Luis Castillo, then good. Hitting more hard line drives to the gaps, Jose could see an upswing in his triples and homers, even if at the expense of a few infield hits. With this more natural approach and a little better luck, don't be surprised if Reyes finally hits 20 homeruns in 2009.