Championship results: Bob Murphy (50%) tied Gary Cohen (50%). More people voted in the championship than any other round, and I think it's only fitting that it ended this way. Murphy and Cohen are co-champions of the Amazin' Avenue Mets Announcer Tournament. I assure everyone that the results are legitimate. As a tribute to each of these fine announcers, here are some of their memorable calls:

"The crowd is chanting, 'We're number one!' The Mets made up 15 1/2 games since the 13th of August. Lou Brock is on second, and Vic Davalillo, the runner on first, with one man out ... ninth inning, 6-0, New York. Gentry pitching, working hard here against Joe Torre. Now in the set position, here's the pitch ... ground ball hit to shortstop ... Harrelson to Weis, there's one, first base ... Double play ... The Mets win! It's all over! Ohhhh, the roar going up from this crowd! An unbelievable scene on the field ... fans are pouring out on the field." - September 24, 1969, Mets 6 - Cardinals 0 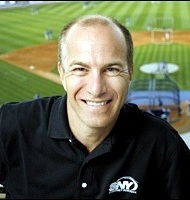 "Perez deals, fastball hit in the air to left field that's deep, back goes Chavez, back near the wall, leaping and... he made the catch! He took a home run away from Rolen!  Trying to get back to first Edmonds, he's doubled off!  And the inning is over!  Endy Chavez saved the day!" - October 19, 2006, NLCS Game 7, Cardinals 3 - Mets 1