Share All sharing options for: 2009 Player(s) Preview: The Catchers

Congratulations. You saw it, the last season Brian Schneider's OPS will eclipse .700. Next season, Schneider figures to be even worse with the bat. But, he hit 9 homers in limited playing time and extrapolated over 500 PA he should reach double digits! Not so fast: he hit the fewest percent of flyballs (21.1%) of his career in 2008, but got extremely lucky with a 15% of his FB leaving the yard. For comparison he hit just 4.6% HR/FB in 2007. Was he merely hitting deeper flyballs? Doubtful, but his hittracker graph reveals a tendency to hit balls to the rightfield foul pole, where Citi is especially shallow: 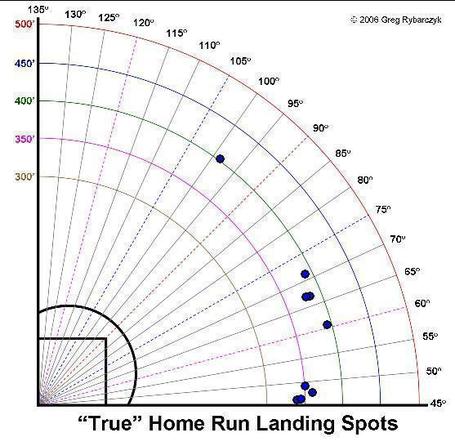 By contrast, Ramon Castro got unlucky in 2008. His batting average dropped 40 points, but his linedrive rate actually rose. His BABIP was .275, which I would normally call unlucky, but Castro's career mark is .276. Expect continued, above-average production from Castro in 2009 with a chance for a rebound.

Jerry Manuel used Castro more that Willie Randolph last year, but pledges to give Brian Schneider the majority of the PT in '09. These factors, however, coupled with Manuel's propensity for changing his mind, could mean the catchers effectively split time next year.