Continuing our NL East WAR projection series, today we're going to take a look at the division's starting infields. Once again I've used Baseball Prospectus's depth charts to fill in the gaps of my pitiful knowledge of other teams' players; I've used Sky's awesome WAR spreadsheet to do what my fourth-grade math skills cannot; I've also averaged the projections available at FanGraphs for plate appearances and wOBA. And away we go: 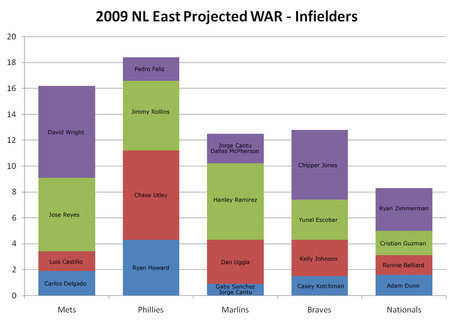 Each bar traverses the infield from first base (bottom) to third base (top), and it really does give you a visual sense of how these players compare to one another. Isolate the purple sections and we can see that David Wright is the class of the third-basemen, nipping Chipper Jones by a small margin. Meanwhile, Hanley Ramirez is clearly the best of the shortstops.

Assuming good health, David Wright projects to be the most valuable infielder in the NL East at 7.1 WAR. Chase Utley projects to be the second-most valuable infielder at 6.9 WAR. He was supposed to miss a couple of months at the beginning of the season but it's looking more and more likely that he'll be ready sometime in April. Pedro Feliz, on the other hand, could be one of the worst, at least offensively (more on that below).

Another thing that stands out is how much positional adjustments can affect a player's value. Shortstops get a +.75 WAR adjustment to account for the relative strength of the position. Conversely, first-basemen get a -1.25 WAR adjustment, which makes sense intuitively because it's fairly easy to find one who is at least offensively competent. The graph incorporates these positional adjustments, so the result is Luis Castillo winding up only marginally less valuable than Carlos Delgado (2.5 WAR vs 2.3 WAR) because he gets a 1.5 WAR bump (+.25 for second base vs -1.25 WAR for first base).

I'll confess that there are a lot of problems with this graph. The biggest is probably that it doesn't include defense. This is my fault: Sky's spreadsheet allows for defensive WAR to be keyed in manually but I was kind of lazy busy so I just skipped it. This penalizes the Phillies most of all because Utley, Rollins and Feliz are all good-to-great defensively, offset partially by Howard's dreadfulness. Overall, inclusive of defense the Phillies would have an even larger projected edge over the Mets and everyone else. Fixed. I have plugged in defensive adjustments (rough estimates based on UZR from the last few seasons) as well as baserunning adjustments per Baseball Prospectus. This revised graph should more closely approximate player valuation than the original one I posted. The graph does account for playing time, calculating WAR based on projected plate appearances.

One potential problem is that I've included only projected starters, so the graph doesn't reflect the relative strengths of backups, so it winds up being a graph of staring infielders, not overall infielders.