Inspired by college basketball's March Madness, we are holding a single elimination tournament in which Amazin' Avenue readers will determine the best TV announcer in Mets history. Sixteen of the top announcers made the cut, and over the next few weeks there will be a daily post with a chance to vote on that day's matchup. Check out the nifty bracket Eric created. 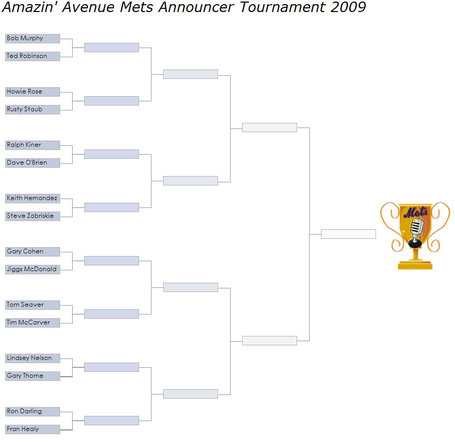 There are no set criteria for voting. Factors like length of tenure in the booth, impact, memorable quotes, and on-air personality are worth considering though. Not every Mets announcer is included, due to bracket layout constraints. Studio hosts and sideline reporters are not included. Each day's poll will end at midnight, Eastern Time. Good luck to all the participants and may the best announcer win. Here is the first matchup: