Share All sharing options for: Ollie's Afternoon Via PITCHf/x

I'm still figuring out my way around this awesome PITCHf/x stuff, so bear with me.  R.J. at DraysBay and Beyond the Boxscore put up a nice post yesterday about PITCHf/x, which can be used to analyze anything from pitch movement to how good an umpire is during a given game.  Data can be pulled from Gameday or from Brooks Baseball.  Here's Oliver Perez's strike zone plot from yesterday's game (click image to embiggen): 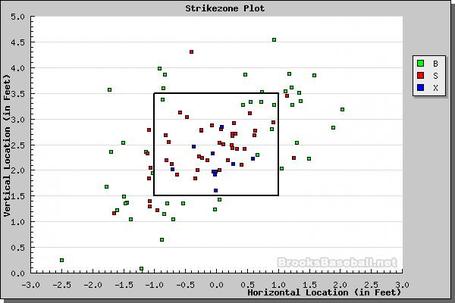 It looks like Ollie's biggest issue was too many pitches on the heart of the plate and not enough on the black.  That is generally the problem for pitchers who can't make it to the 5th inning.  The low corners in the strike zone are both barren.  Also, it doesn't look like he was getting squeezed too much by the home plate umpire.  There were a few pitches up in the zone which should have been strikes, but nothing worth complaining about.  Let's have a look at his release point: 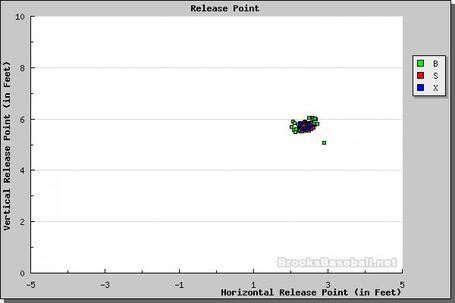 This is the hitter's view of Ollie's release point.  I expected it to be more erratic, given his reputation and propensity for changing his mechanics at a moment's notice.  Outside of that one tiny outlier, he was pretty consistent.  So there's one positive.  Finally, here is the breakdown of his pitches:

A 4.7 mph difference between fastball and changeup?  That's not going to cut it at the major league level.  Also, according to Fangraphs, Ollie threw his changeup just 2.6% of the time last season, so yesterday was out of the ordinary.  I'm going to assume Ollie is still getting in shape and his fastball velocity will increase as the season goes on, because an 89 mph fastball for a pitcher with control issues is not very good.  For comparison purposes, Reds closer Francisco Cordero's fastball averaged 95.35 mph yesterday.  The PITCHf/x tool should prove to be pretty useful this season, and it gives us some fun graphs to look at as well.