Again, the Mets were done in by poor clutch hitting tonight. They had eleven hits and six walks and managed just the four runs, stranding 14 batters overall. Murphy, Beltran and Church each had three hits, Castillo contributed nothing, and Sheffield added a pinch-walk.

Pitching-wise, the Mets got a number of bad breaks. Emilio Bonifacio had, by my count, 37 infield hits tonight. Throw in a bloop by John Baker and a couple of monstrous homeruns by Uggla and Ramirez and the Mets wind up on the crummy end of a 5-4 loss. John Maine was solid tonight, walking one and striking out five. The relievers got tagged for three earned runs, but only Sean Green was actually bad. Bobby Parnell allowed three hits and a run, but only Ramirez's RBI single was hit hard.

So it's 2-2 to start the season. Could be worse, should be better. Don't forget that tomorrow's game starts at 6pm but the first hour will be blacked out because of FOX's utterly retarded interesting teevee exclusivity window. You can follow the game online, hear it on the radio, and of course, chat away here. 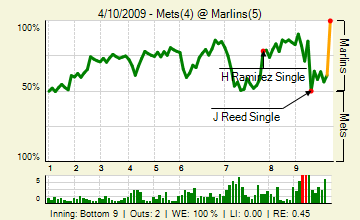