Share All sharing options for: Pelfrey's First Start In PITCHf/x

Big Pelf struggled through his first inning of work this season, but made a valiant effort to stay composed, pushing through five innings and earning a win. What went wrong in the first frame and how did he adjust? Take a look at his pitches in the first. (The x-axis is horizontal movement, the y-axis is vertical movement, and the size of the dot is supposed to be speed, but you probably can't tell a difference): 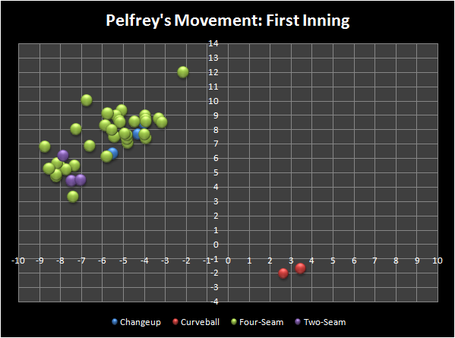 Like with every failure and success in Mike Pelfrey history, the fastball seems to be the primary culprit. Many of his four-seamers are pretty flat, having little horizontal movement. The result was several balls down the middle (Votto) or way out of the strikezone. The camera only registered 2 two-seamers the whole inning, which is probably a combination of his not using the pitch and a few intended sinkers looking like straight fastballs.

In contrast, his other 4 innings: 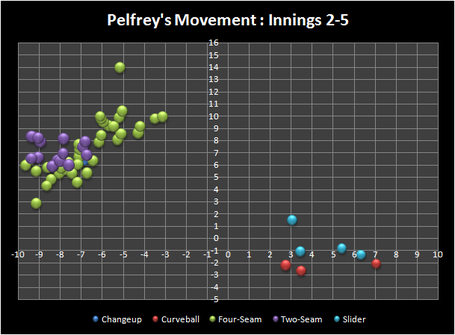 Pelf got more consistent movement from both of his fastballs, threw more sinking-things, and even mixed a few sliders. The biggest difference was his pitches hitting the bottom left of the zone more. The lesson for Pelf: throw sinkers, throw them low, and most importantly, in the strike-zone.