Share All sharing options for: Pressing The Panic Button

You know those Mets fans who post irrationally in forums, calling for Beltran's trade everytime he makes an error? Yea, turns out those people run the Mets:

But while Mets people are all understandably thrilled to be in their comfy new confines, a slow start that has revealed weaknesses in the team's rotation, defense and lineup has offset the jubilation. Although the new season is just seven days old, Mets people seem genuinely dismayed.

From inside Citi Field's bunker room:

Omar: How could Murphy drop that ball?!?! He means business...what kind of businessman drops a baseball?

"We have a good team ... on paper, anyway,'' lamented one top Mets decision maker.

Can I see that piece of paper you've got there?

1. The defense looks slipshod. There's no excuse for back-to-back games in which players drop routine fly balls, though it's possible Church is still getting acclimated to what looks like a difficult right field. And by the way, Gary Sheffield is not going to help there. Manuel intends to give Sheffield starts in right and perhaps even left, but only to keep him sharp, as Sheffield, 40, himself admitted he's concerned about his outfield play after a whole year away. "He can't play the field anymore,'' one scout said, flat out.

Obviously, Murphy made a terrible play. Before Murphy dropped that flyball, however, he lead the team in UZR with 1.4. And stop telling me the sample size is too small to declare him good yet,  while arguing he's bad. Give him time to prove himself either way. It's too early to make judgement on any player on this roster, least of all the player who just learned his position.

2. There are a few issues with the starting pitchers, too. Yes, Johan Santana looks more terrific than ever, Livan Hernandez turned in a nice Mets debut and John Maine was solid the first time out after a dreadful spring in which higher-ups questioned whether he had lost his confidence, but Oliver Perez struggled badly out of the stretch in his outing and Mike Pelfrey hasn't yet shown the dominant stuff he flashed last year.

3. The offense is underachieving. One Mets exec remarked that the Padres' Mexico League reclamation project Walter Silva shut them down "on nothing'' before Wright's three-run home run put them in business -- at least until three Padres' relievers, including Duaner Sanchez, whom the Mets released in spring, did the same.

Yea the Mets totally didn't hit Walter Silva...before they scored those five runs against him. The lineup so far by OPS:

The two getting the most plate appearance have disappointed so far, but the lineup hasn't been bad. And wouldn't you know it? Castro blasted one off Duaner the other night.

4. There isn't enough fire. Another Mets person said the players seem to "lack a killer instinct'' so far, which might reflect leftover feelings from their two straight September fades. 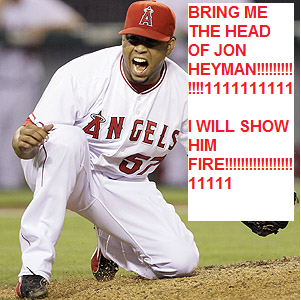 If the Mets front office really is worried about the teams slow start, I'm disappointed. The only person to really play below my expectations so far is Mike Pelfrey, who has been pitching through pain and noticeably flat on his sinker. I'm also dissapointed at how little I got to make fun of Heyman. That article was surprisingly-what the-

Scrappy Padres second baseman David Eckstein reminded the Mets what they missed when they failed to sign him yet again this winter by killing them in their inaugural game at Citi Field with three hits and a walk.