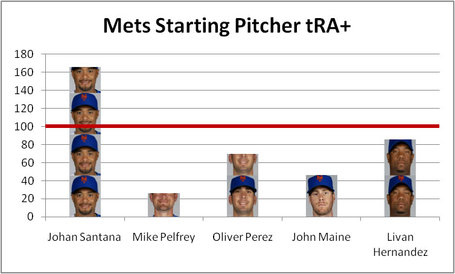 An explanation of tRA+ can be found at StatCorner. Short version for lazies: It considers what the pitcher actually did -- not just what earned runs he happened to allow -- adjusted for defense and park and expressed relative to the league (100 = average).

This can't really surprise anyone given what we've seen from the starting rotation excepting Johan Santana, but graphs can really hammer home -- especially for you visual learners out there -- just how bad these guys have been. Player photos were added for levity.