Mike Pelfrey was very much the balls for most of last season's second half, but he's had an up-and-down few starts to begin the 2009 season. Let's take a look at those starts using PITCHf/x. Let's start with his pitching lines for his three outings so far.

Not a great start among them, but his most recent outing -- yes, against the Nationals -- was his most promising so far, and it was overwhelmingly his best start in terms of groundball ratio. A sinkerballer, Pelfrey excels when he keeps the ball on the ground, jamming hitters and inducing plenty of weak dribblers and broken bats. Here's an admittedly spartan scatter plot of his groundball-to-flyball ratios from his first three starts. 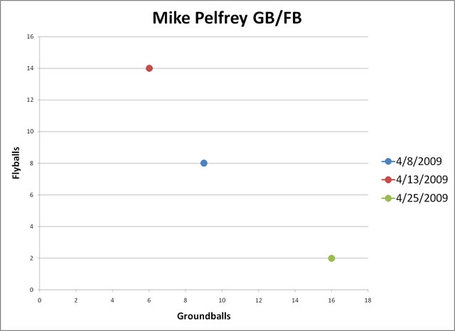 The key to this graph is that dots in the lower right quadrant are good, dots in the upper left quadrant are bad. It therefore shouldn't be surprising that his best start -- Saturday's go-round against Washington -- was his best, and his prior start, a bludgeoning by the Padres, was his worst. The other dot was a game against the Reds in the season's opening series, which was not quite as bad as the Padres game and not quite as good as the Nationals game.

Now we'll take a look at Pelfrey's pitch selection in those starts. 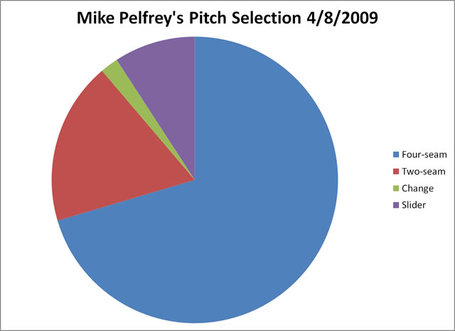 In his first start, Pelfrey threw a lot of two-seam fastballs and very few changeups. 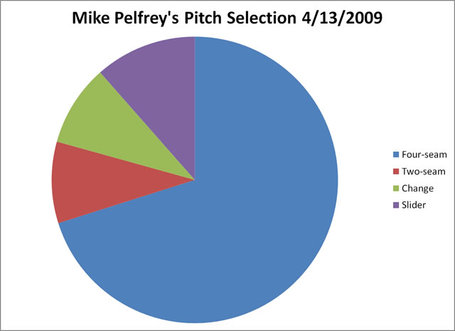 In his second start, Pelfrey cut down on the two-seamers and mixed in some more changeups. 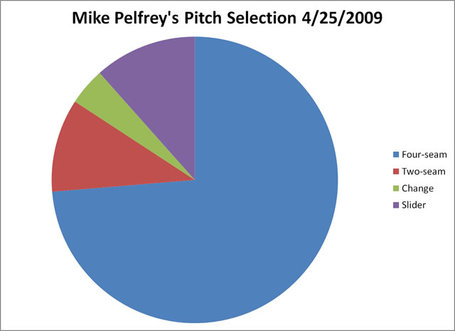 Most recently, he split the difference, but also threw a higher percentage of four-seam fastballs than in either of his first two starts. I always figured he would be most dominant when his two-seamer was biting, causing batters to hammer the ball into the ground. I was surprised to see how few two-seam fastballs Pelfrey typically throws (around ten per game), and that he basically relies on the four-seam fastball 65%-75% of the time.

One interesting thing I noticed while poring over the pitch data was how his release point varied from start to start. Here is a scatter plot contrasting his release points from his three starts. 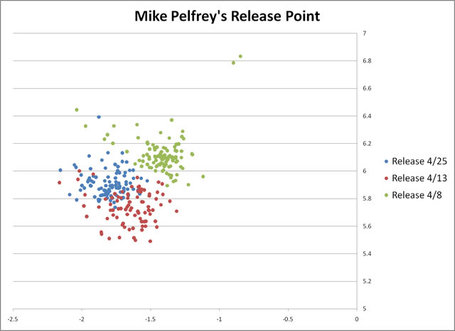 What isn't clear is whether Pelfrey really moved his release point around this much or whether the PITCHf/x system is just calibrated differently depending on the ballpark. If we were to assume the latter, we might also assume that two starts at the same park should at least be calibrated similarly, but we don't see that when we look at the 4/13 and 4/25 starts, which both took place at Citi Field. Maybe it's a quirk of the system; maybe it isn't.

If we're to believe the data, Pelfrey was most successful when his arm angle was closest to three-quarters (the blue dots). In his first start he was a little more upright and in his second start he dropped down a little further. I'll reiterate that these assertions assume reliable data, which we aren't yet certain of.

One last thing we can look at is the movement on Pelfrey's pitches. 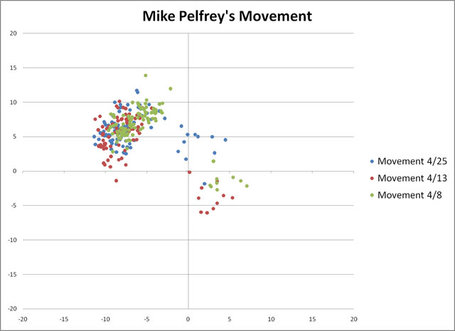 The big clump of pitches in the upper left are Pelfrey's assorted fastballs and changeups. Movement-wise there doesn't seem to be much to distinguish them from one another. More interesting are the scattered dots towards the middle and right of the chart. These are Pelfrey's sliders (PITCHf/x identifies some of them as cutters, for what it's worth). In his most successful start, Pelfrey's slider had less lateral movement and less downward movement than in his two other starts. I would have thought that more movement would have contributed to a more successful slider, and that intuition turns out to be well placed. Towards the overall goal of figuring out What was different? about the most recent start, the slider movement is a red herring, as Pelfrey threw just two sliders (of eleven) for strikes in the 4/25 start, as opposed to six (versus four) on 4/13 and four (versus five) on 4/8.

So why did Mike Pelfrey induce so many more groundballs in his last start? Given all of the data above, the results are inconclusive at best. Maybe it was the strength of competition, though the Reds and Padres aren't particularly dominant opponents. Pitch movement seems not to have been a factor, which surprised me to some degree. My best guess is the release point hypothesis, but I'll confess that the evidence for it is not especially compelling. Ultimately, it might just have been "one of those days". As always, sample size is an issue here. I was hoping to find some concrete answers here, perhaps with increased downward movement on his fastballs against the Nationals, but the data don't seem to support that. All we can do is keep an eye on him and see if any patterns develop over a larger set of games.