With all the recent fascination on who is the "real Ryan Church," the Mets real Jekyll-and-Hyde character from last year has gone seemingly overlooked. On June 25th, 75 games into the season, Carlos Delgado was hitting .229/.306/.396. Suddenly, for many Mets fans, Mike Carp passed him on the depth charts. Then, returning to the lineup on the 27th as the DH, Delgado launched a 2-HR 9-RBI assault on the Yankees. From that point forward, he posted a .308/.392/.626 line and had suddenly became a MVP candidate.

What happened? Did he merely respond better to his new manager? That's unlikely. Was his wrist finally healed? I don't know. Ultimately, it's hard to say. Instead we can concern ourselves with whether he can repeat his fantastic second-half numbers in 2009.

On more than one occasion, I've linked to this fantasy article by Derek Carty as a reason for my pessimism regarding Delgado. Derek's analysis is persuasive, but much of it hinges on his assumption that Delgado's power is steadily declining. He cites tHR, an expression of the fantastic hittracker online data. In order to test this conclusion, I split Delgado's hittracker data between the "good half" and "bad half" of his season: 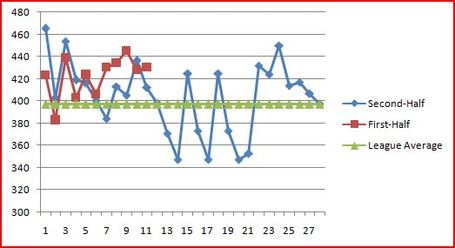 Probably now you're thinking: "Who cares? Get to the point". Well, although there is a sample size issue here, we can draw a few possible conclusions:

1. Delgado, who trailed only Adam Dunn in "no doubt" homers last year, faced bad luck in the first half, with only his sure shots crossing the fence. Then, in the second-half, he got some lucky breaks.

2. Delgado hit more line-drive homeruns, which would make sense, as he posted an uncharacteristically high 24.5% linedrive rate, in contrast to a career-low 33.9% flyball rate.

3. OR, Delgado really did get lucky with the homers in the season's final stretch and his comeback was mostly an illusion.

Assuming number 2 is true, Delgado's contact skills won't be sunk in 2009. Hitting lots of "fliners" could buoy his BABIP, while keeping his power levels up. Number 1 and 3 aren't exclusive; maybe Delgado went from unlucky to lucky very abruptly. These three possibilities are also very observable phenomenon, so your gut reaction as to which is true is probably worth hearing this one time.

Citi Field, on face, would seem to be a terrible fit for Delgado and his opposite field power. When I traced the wall on his hittracker plot, however, it wasn't so bad: 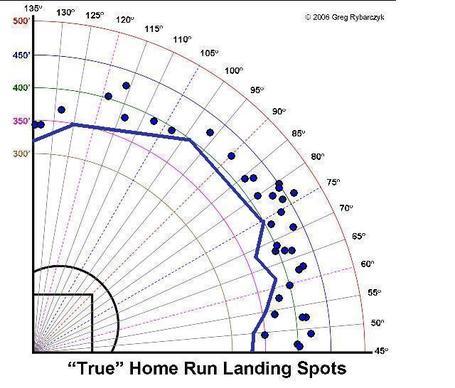 Granted I just sketched the wall in there, but the landing spots almost seem to outline the new fence. Prophecy?

In conclusion, Delgado needs to keep his LD% up to maintain his batting average and power improvements from last year. He might need some luck, though, to match his home run totals and that should be a legitimate source of concern. The fact that no one else seems worried is almost equally concerning. While Delgado can maintain his "improvements" from last year, he might just as well bomb in the first half of 2009. Given the seemingly unreasonable expectations so far, that scenario would probably lead to sudden panic throughout the media, a Nick Evans protest movement, and a contract for Dallas McPherson. We can only remain cautiously optimistic and hope it doesn't come to that.