Oliver Perez In So Many Graphs And Charts

Share All sharing options for: Oliver Perez In So Many Graphs And Charts

In continuation of Oliver Perez week, let's check out the statistical breakdown of Omar's 36 million-dollar Titanic. It's early, so all sample size warnings apply and not everything is completely clear cut, but here goes. First the good news:

Oliver has been the victim of some bad luck in the early going. His 54.6% Left On Base percentage should regress back toward 70 as the season goes on, aiding his terrible run-prevention. Surprisingly, his strikeouts are right around last year's mark, despite his fastball being noticeable flat so far. Obviously his control has killed him, and to be the pitcher the Mets are paying for, both his strikeout and walk rates need to improve. While I'd like to say his Batting Average on Balls In Play has been unlucky at .354, that's not entirely true...

Small sample size aside, pitching to contact that much is terrible. Here, his declining fastball velocity probably explains the problem. Fangraphs says he's down to 89.1, a full 2 mph slower. While that's bad, it may be worse than we thought.

While it appears Oliver has traded in his slider for more changeups, I suspect those "changeups" are just really crappy fastballs. Take, for instance, this movement graph from his start against St. Louis I posted previously: 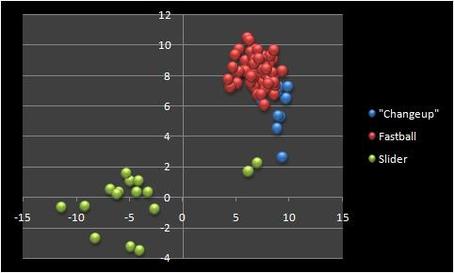 Those fastballs and changeups (and even a few sliders) look like the same pitch. Ultimately, whether those pitches in blue are bad fastballs or changeups, is a moot point: throwing two nearly identical pitches 4 mph apart isn't going to cut it as a fastball-changeup combination.

Remember why we signed Perez instead of Lowe? Y'know, if he could only get his walks down, he'd be incredible.  Ok, this is my only I-told-you-so moment:

Calls for Oliver Perez to simply stop walking people is like asking Russel Branyan to stop striking out so often. If Branyan didn't swing like he was golfing, he wouldn't be hitting homeruns in the first place. If Perez didn't challenge hitters with high fastballs or throw his inconsistent slider early in the count, he wouldn't get the same high number of strikeouts. Perhaps with his fantastic stuff, Perez could employ a better approach successfully, it just doesn't seem likely at this point.

The only thing that's changed since then is I wouldn't characterize his stuff as fantastic. Check out this graph from a particularly successful 12 K/ 1 BB start last year against Philly: 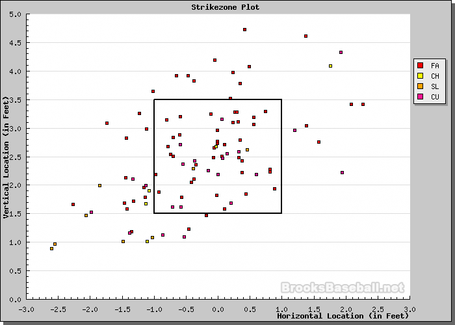 Notice how, when he misses, he tends to miss low-and-away to lefties. By contrast, the other day against the Nats: 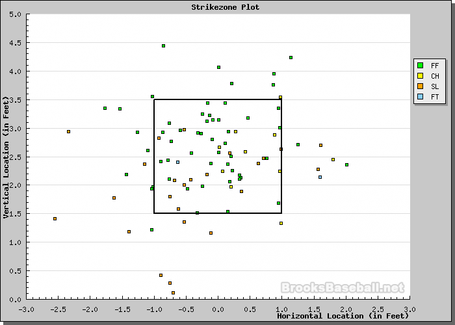 While he's hitting the black more often, he's all over the place. It appears he's also throwing more pitches in the zone, so why the control problems? Well, his O-Swing% or amount of swinging strikes he entices on pitches outside the zone is down to 14.1%. His career mark is 21.5% and ideally, for Oliver, he's closer to the 24-26 range, like in 2007 when he posted a 26.1% mark.

This lack of swinging strikes goes back to the fundamental problem: his declining stuff. Unable to get batters to swing, he has to come back into the strike zone where his 88 MPH fastball gets rocked.

Oliver Perez is naturally wild, slinging the ball the plate never knowing exactly where it will go. He needs to get swinging strikes, as his best pitches, the low sweeping slider and the high fastball, live outside the zone. Otherwise, you see what's happening now: either an easy walk or batting practice.

A bullpen stint isn't the likely solution, nor is it what's best for the team. In the 'pen, his velocity would just increase by nature of throwing shorter stints and wouldn't make a real improvement. And even if Oliver Perez makes a great reliever, it wouldn't be worth it.  The general overrated importance of middle relievers, coupled with the likelihood Manuel would never trust him in a high leverage situation, would probably max his WAR out at .5. That'd make him worth about 2.5 million dollars. If there's any hope left he earns some of his contract, Perez needs to become a passable starter, if not an average or good one.

What happens when an all-stuff, no control pitcher loses his stuff? 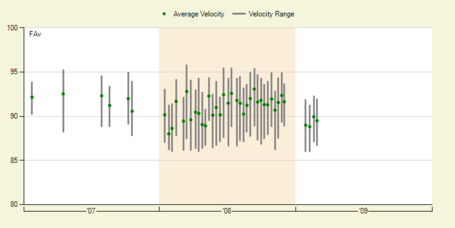