The Mets signed Tim Redding to a 1-year contract this past offseason to little fanfare.  The general consensus was that it was a decent signing to solidify the back end of the rotation, and the Mets starting pitching projected nicely assuming Derek Lowe could be signed as well.  That was not meant to be, and the difference in projected performance between $36 million Ollie Perez (96 tRA+ in 2008) and $2.25 Redding (90 tRA+ in 2008) was minimal.  That topic has been covered enough though.  After battling injuries in spring training and getting lit up by the University of Michigan baseball team, Redding made his Mets major league debut last night, once again to little fanfare.  Let's take a look at his start.

Redding's average fastball velocity last year was 90.7 mph, and last night it was 89.3 mph.  However, he dialed it up to as high as 91.8 mph last night, and was at 90+ on about ten pitches.  Considering he's probably still building up arm strength after his issues this spring, this shouldn't be anything to worry about.  The difference between his fastball and changeup last night was about 8 mph, which is about where it's been for his career.  Not quite Santana-esque, but not terrible.

Here is his strike zone plot: 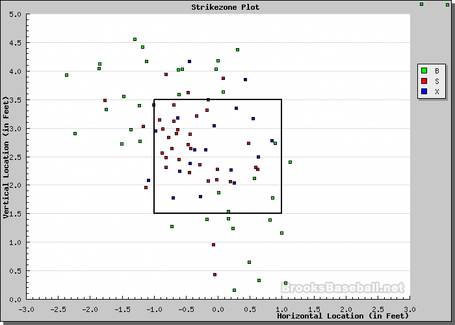 Remember that this is from the point of view of the catcher.  Two things stand out here.  One is that we can see why Redding is a fly-ball pitcher; he lives up in the zone.  The other is that he didn't serve up many fat pitches.  The heart of the strike zone has very few dots.  This is a good thing.  In fact, he didn't allow any line-drives last night.  While obviously unsustainable, this is a sign that batters weren't putting great swings on Redding's pitches.  His control wasn't very good in the first inning (10 strikes, 11 balls) but his strike % thereafter was 61%.  Sam noted yesterday that a key to Redding's success is minimizing walks, which is what he did in innings 2-6 (just 1 unintentional walk).  His final line was 6 innings, 2 hits, 4 walks, 4 strikeouts and 2 earned runs, good for a 143 tRA+ (enjoy it while it lasts Timmay).

Redding wasn't spectacular, but he certainly wasn't craptacular either.  If not for his first inning struggles, I'd grade the start an A.  Additionally, he apparently graduated from the Steve Trachsel School of Game Pace Management.  The best way to describe the start is "encouraging", especially considering that the Dodgers lineup sans Manny is still formidable.  His stuff in general isn't all that impressive, but weighing his salary and role he should have value to this team. Despite missing almost two months, Redding can likely be counted on for  a little less than 1 WAR the rest of the way.  He's better than Livan Hernandez, but a rotation featuring both of them the rest of the season does not bode well for Mets playoff hopes.  Hopefully Ollie can regain his form or Jon Niese will get another shot