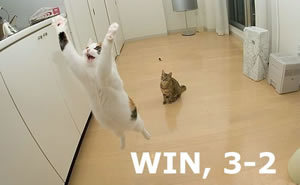 You could wait around all season for a win like that. For a while it looked like Mike Pelfrey's boo-boo to Kevin Youkilis in the bottom of the first was going to be the difference in this one. The Mets had managed just six baserunners in eight innings against Josh Beckett, scoring a fortuitous run in the first thanks to two defensive miscues by the Red Sox. Then bupkis.

The Mets remained with in striking distance because Pelfrey was terrific, notwithstanding the two-run single to Youkilis. He walked just one and struck out six in seven innings, rolling twelve groundball outs to just three in the air. He left on the short end of a 2-1 ballgame, and things looked dismal after David Wright and Jeremy Reed whiffed in the ninth, overmatched by Jonathan Papelbon's heater.

Gary Sheffield had walked to lead off the inning, but he remained at first with two outs when Omir Santos strode to the dish. Santos, blissfully unaware that he was in fact Omir Santos, jumped on Papelbon's first offering and drove it towards the zenith of the Green Monster. On contact, Santos reacted as if the ball was sure a goner, but the first teevee view was inconclusive and the umpires initially ruled it a double. A brief video review later Santos had a two-run homerun, turning a 2-1 deficit into a 3-2 lead.

Yay, we all thought, though we quickly choked on our optimism as J.J. Putz was shown warming up in the bullpen. Francisco Rodriguez was nowhere to be seen, having collapsed earlier due to back spasms. Dang! Putz reaffirmed our concern by walking Youkilis to lead off the bottom of the ninth, but three great defensive plays (and one bad Wright throw) sandwiched around a J.D. Drew fliner to right put this one in the books.

Plenty of credit goes to Santos, obviously, but also Ramon Martinez, who played a terrific game at shortstop. This game doesn't change the fact that neither player is really qualified to don a big league uniform, but for at least one day we can all be glad they're Mets. 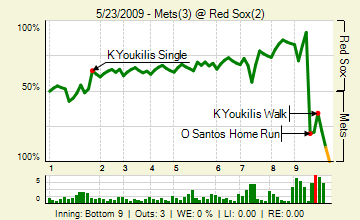