Share All sharing options for: Asking The Catcher Question

A growing number of Mets fans think Omir Santos is the best catcher on the Mets roster, without any real justification. Meanwhile, another contengency of fans believes Ramon Castro, who has hit more homers in the majors than Santos has played games, should be the starter. With Brian Schneider likely back from injury this Friday, many feel Minaya has a tough choice to make between Santos and Castro. With so many either pro-Santos or pro-Castro, however, is this choice a false dilemma? Maybe Schneider should be released; the Mets are on the hook for his 4.9 Million dollar salary either way. So which combination of two catchers best helps the Mets going forward?

First, Castro is the hands-down best option, health permitting. Granted, Castro's health is never assured, but that's not a reason to release or trade him. His bat's still there. His 8.3 % HR/FB before the Sox game would be the lowest of his career, making it no surprise he went deep. His plate discipline has been better, and given a little better luck with the balls-in-play,  Castro could beat his .753 OPS from last year. His ZiPS Rest-of-Season projection, a nifty new feature at FanGraphs, is a .325 wOBA (.741 OPS).

ZiPS projects Santos to hit a .272 wOBA (.610 OPS) for the rest of the season. Over 200 PA, the difference between a .272 wOBA and .325 wOBA is 10 runs or one win. Santos probably won't make up the difference in defense either, as, with the exception of one anomaly year in A-ball, minor leaguers ran all over Santos.

If the Santos-defenders dismiss these projections and think his .750 OPS is the product of a legitimate improvement, they need to realize the absurdity of his stats in the tiny sample size. Boasting a minor league-career .303 OBP in the minors, Santos has swung at a terrible 35.8% of pitches outside the zone. By contrast, Castro has swung at a career 20% of pitches outside the team, Schneider 23%. Anything >30% is certified hacker. Maybe you remember: 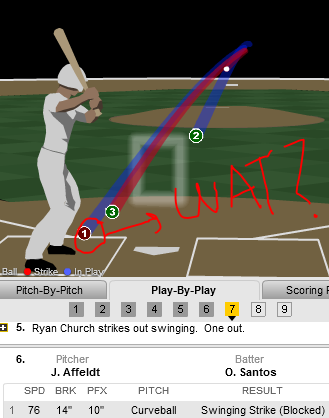 Schneider, on the other hand, is projected to repeat last year's .310 wOBA, which may be a tad optimistic. Still, even if he just hits around a .660 OPS, he's Omir Santos with plate discipline and a throwing arm.

Given Schneider and Castro's recent injury histories, it's almost a no-brainer to go with the scenario that allows you to keep all 3 catchers. Even if they were perfectly healthy, however, the argument for Santos seems to have a lot more to do with one homer than any meaningful evidence. It's not a great story, but the Schneider-Castro time share is still the best option for the Mets. Castro-Santos could be bearable, if Castro gets as many PA as his health permits. Santos-Schneider is a terrible idea, but sadly, very possible.