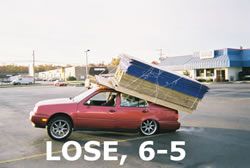 Oliver Perez stunk up the joint on Saturday, again, and it's not like any of us could reasonably have expected otherwise. Somewhere in the back of my mind I remained at least a tiny bit hopeful that he would take stock of his utter and complete craptacularness and begin to turn things around. I seem to remember him being generally good against the Phillies, so there was still a glint of optimism amid my tattered psyche. He didn't even have to pitch extraordinarily well to have an impact. I think at this point we'd be moderately satisfied with just a quality start (six innings, three runs) out of Perez. Keep the Mets in the game and eat up some innings.

None of that happened, of course, and the epic fail that was Omar Minaya's offseason rotation plan continues to crumble before our eyes. Oliver Perez was once a promising young strikeout machine, but now he has devolved into an expensive and utterly useless waste of space who is so demonstrably bad at everything he does it defies logic and exceeds the limits of my modest vocabulary. I would literally have to begin inventing new words to describe the scope of baseball misery he inflicts on all who watch him pitch.

I railed against Omar Minaya for signing Perez instead of Derek Lowe this past Winter, and nothing since the day that Lowe chose the Braves (and a few million dollars) over the Mets has convinced me that Minaya made the right choice. At this point, the burden of proof is so heavily with the Perez/Minaya defenders that it's not even a discussion worth having; the point has been all but conceded. The new question is whether the Mets would have been better off pursuing any of the other, supposedly lesser, starting pitchers who were available. Jon Garland has a tRA+ of 118 for the Diamondbacks this season. Randy Johnson has a tRA+ of 84, which is pretty bad but is actually quite impressive when compared with Perez's 41. You could even make a compelling case that Pedro Martinez, still a free agent, would have been a smarter choice. Hell, if the Mets can convince Perez of a demotion to Triple-A I could be convinced to sign Martinez right now to take his place.

That the Mets overcame Perez's lousy start to take the lead at one point (no small thanks to Ken Takahashi) doesn't even matter much in the grander scheme. The Mets had a number of chances to win this game, but losing somehow satisfies me more because a win might have made me hate Perez slightly less (as it is, Sean Green is vying for a spot on the "Dead To Me" wall of shame). Which provides a perfect segway to our new semi-regular feature:

Jerry Manuel's Retarded Move of the Day: After Ramon Castro led off the top of the eighth of a 5-5 game by drawing a walk, Manual called on his mancrush Omir Santos to pinch-run for the Hippo. Santos was eventually thrown out at home on Carlos Beltran's two-out single to right (Santos would also pop out to end the top of the ninth). An inning later, the game still tied at five, Manual inserted Jeremy Reed as a defensive replacement (?) for Daniel Murphy in left. Unless Manuel was simply unable to plan a full inning ahead, the smarter move would have been to pinch-run for Castro with Reed, and leave Reed (who probably could have scored on Beltran's single) in the game at that point. There wouldn't be much to second-guess here if Manuel had left Murphy in the game after his at-bat in the ninth; Santos pinch-running for Castro makes some sense after all. But Manuel didn't leave Murphy in, which makes the whole series of substitutions perplexing at best and mind-numbingly obtuse at worst. 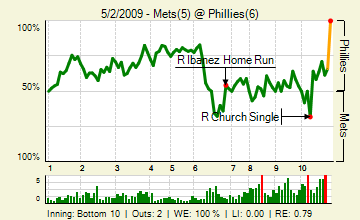