Ken Takahashi debuted for the Mets yesterday, pitching 2.2 innings of scoreless relief from the top of a Titanic life-raft, ultimately letting the Mets back into the game. Now it seems Takahashi's successful debut may have earned him at least a spot start, with Oliver Perez's job up-for-grabs. So who is Ken Takahashi?

Takahashi recently turned forty, spending the entirety of his fourteen-year career in Japan with the Hiroshima Toyo Carp. He was reliever who converted to starting in 2001. Mildly successful as starter, he followed Carp-teammate Hiroki Kuroda to American, hoping to score a relief gig. While his numbers from Japan aren't particularly impressive, it's worth noting Kuroda only had a 6.17 K/9 his final year in Japan. That said, Kuroda demonstrated much better control.

Takahashi supposedly throws a curve, fastball, circle change, slider, and sinker, and all those pitches were on display yesterday: 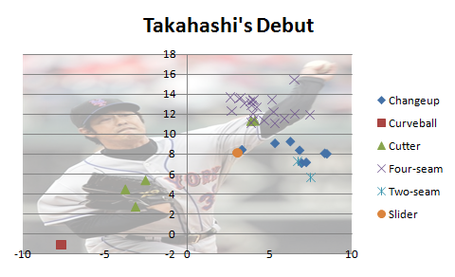 His fastball sat in the 86-89 range and 13 of the 21 hit the zone. His curve looks like the most useful breaking ball, but we'll have a better idea of that when he throws more. Like most soft-tossing pitchers, his relative success will depend on how effectively mixes and controls his assortment of pitches. There's some deception to his delivery, so he may be surprisingly effective for a while. Entrusting him with anything more than this one start and long-man duty, however, is a bad idea.