So, are the Mets gritty enough for everyone now? The Times thinks Pelfrey showed "grit" against the "resilient" Phillies. The Phillies have to be "resilient", the lowest ERA in their starting 5 belongs to Brett Myers (5.35).

Watching Shane Victorino's bush league play brought back some painful memories involving Marlon Anderson. Mike Silva makes some good points about the play. The umpiring that I've seen this year has been AWFUL, particularly involving the strike zones and what if Reyes had done that kind of play? Of course, Silva's points are overshadowed by the ridiculous trade suggestion of Oliver Perez for Scott Kazmir. 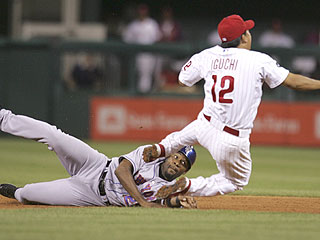 Jerry Manuel might have to pay the band for his dance with Bill Welke.

Dan Graziano gets on the Carlos Beltran bandwagon led by the AA engine.

Remember when we had Luis Ayala closing games for us?

Some surprise from the Met minor leagues about the decision to start Jonathan Niese tonight. Toby Hyde thinks it's risky over Nelson Figueroa.

The Marlins' slide continues as they lost to the Braves 4-2 yesterday afternoon. Hanley Ramirez homered twice, but the real news is that the Marlins might be without starter Anibel Sanchez for a while after reaggravating his surgically repaired shoulder.

Part of me thinks this story is awesome, but then part of me dreams of home field advantage in the World Series. I'm going to decide in favor of awesome. Milledge can be the final guy who just rides the bench in the All-Star Game.

Jay Bell Brian McCann is set to return to the Braves with glasses.

The Nationals got the first crack at the Manny-less Dodgers and took advantage of it, only allowing Los Angeles to score 9 runs. The Nationals still won, 11-9. Prior to the game, Washington brought up Ron Villone.

The Arizona Diamondbacks have fired manager Bob Melvin after their 12-17 start. AJ Hinch is expected to replace him.

Sad news, as former Red Sox outfielder Dom Dimaggio passed away yesterday at the age of 92.

The Yankee losing streak is now at 5.

Dontrelle Willis is back! And even better news, he's not playing the Mets!

Cardinal center fielder Rick Ankiel was placed on the DL after that vicious collision with the outfield wall.

Now that the Dodgers are $7 million lighter in the payroll, will they go after Jake Peavy?

That's all I've got for today everyone. Try to enjoy Jonathan Niese tonight!