Unbeknownst to most Mets fans, Johan Santana has experienced a statistical decline of sorts over the past three years. After insane tRA's of 2.38 and 2.33 in 2005 and 2006 respectively, the mark rose to 3.07, 3.66, and finally to 3.75 in his first season with the Mets. While those numbers still mean he's at a great 5 Wins Above Replacement, Johan looked more like a top-10 starting pitcher than the Barry Bonds of the mound.

Those three years of seeming decline, however, didn't follow an exact pattern. In 2007, he pitched more to contact, as his LD% rose from 13.7% to 18.8%, despite missing roughly the same number of bats. The next year his LD% dropped to 16.2%, but Johan allowed a career high 33 homeruns. Then, in his first year with the Mets, his homers dropped back to his career average, but his LD% rose and his K/9 dropped. The strikeout rate was the most troubling symptom, as he should have struckout more, switching to the weaker National League. While great pitchers like Johan can effectively pitch to contact, 2008 marked the first season where a precipitous decline in stuff was evident.

Johan Santana, however, a notoriously slow starter, is off to a vintage Johan start. His ERA equals his WHIP, which screams unsustainable, but the results have been fairly real. His K/9 is a ridiculous 12.25, and besides opening day, his control has been equally phenomenal. As Eric noted after the Phillies game, Johan's batted ball profile has been pretty bizarre, with 23.3% LD, 29.1% GB, and 22.1% FB only equaling 75%. The rest have been infield flies, which are as close to an automatic out as you can get.

Johan's 20% IF seems pretty unsustainable for a guy with 13.5% career mark. Unlike his 90.4% Left On Base percentage, however, we don't know what will happen in lieu of more IFFB. Those additional 10% of runners will just come home and be runs, but which of LD, GB, or FB will rise as his IFFB rate declines? Check the pitchf/x on these infield flies: 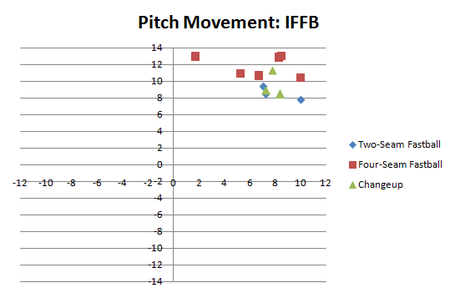 This graph really only raises more questions than it answers, namely: Why is pitchf/x suddenly distinguishing between two different fastballs? These pitchf/x cameras misidentify some pitches, but turns out he's actually throwing something more often enough that, the pitchf/x cameras at least, think is a two-seam fastball:

Throwing a "new" pitch 10% of the time is no small adjustment, and is probably a big reason he's getting so many strikeouts and more weak contact (infield flyballs). Whether he's actually started throwing a two-seam fastball, I don't know and it honestly doesn't matter, because the break of his new pitch is pretty distinct from the regular ol' heater.

The average velocity of the pitch is 86.1 MPH, right between his 91.4 fastball and 80.8 changeup. In fact, it's the exact average of the fastball and changeups velocity. And as you can see from the movement tables, it's very similar to the changeup, with just a little more down and out movement. Check out the graphical form from his start against the Marlins: 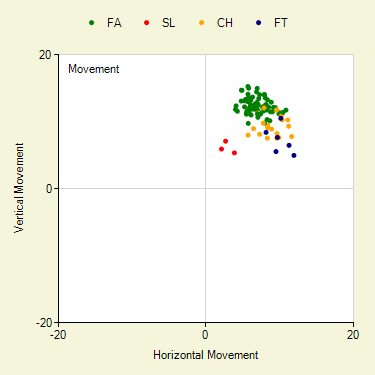 Santana has seemingly just added a third-component to his already devastating fastball-changeup combination. It seems he always threw the two seamer, but this incarnation is much more distinct and breaks much more like his changeup. This two-seamer just looks like a changeup coming in on the batter but is slightly faster. No wonder he's got hitters so badly fooled; he's throwing what essentially looks like the same pitch out of his hand with three distinct speeds and pinpoint accuracy.

These are the results on the two-seamer pitch so far this season:

This adjustment is incredible for a pitcher of his age and status, and his purported decline may be over. With Santana's control, and his renewed knack for swinging strikes and weak contact, he could post 9+ WAR seasons of vintage Minnesota Johan. Couple those factors with the homerun suppression from playing his home games in the batcave and his ability to get better in the second half, and a Cy Young seems within striking distance.