"His history wouldn’t have indicated he would be this good." -Jerry Manuel

Jerry makes an fair obvious point, but what exactly is Fernando Nieve's history? Nieve was actually a very projectable prospect in the Astros organization, not long ago, before undergoing Tommy John surgery in 2007. In 2006, Baseball America ranked him the #3 prospect in the Astros system. He pitched in the majors in 2006, demonstrating some shaky control and a serious homer problem. After some really frustrating stints in the minors last year, the Astros gave up on him. This year in Binghamton and Buffalo, Nieve posted good, not great, numbers typical of his former top-prospect days.

As a starter, Nieve throws a 92 mph fastball that touches 94, an 83-86 mph changeup, a slider, and a curveball. From last night's start: 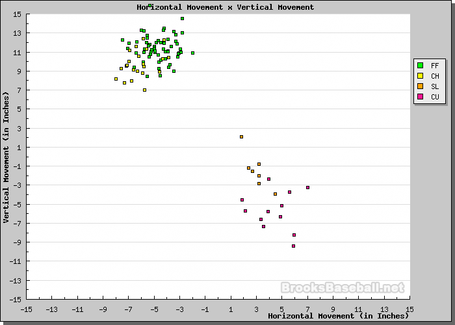 Nieve's success lies with the speed differential between his fastball and changeup. The curveball doesn't look like an outpitch and the slider is more of a show-me pitch. He used his changeup well last night, getting two strikeouts and a double play ball. The other two strikeouts were on a well placed curves.

If Nieve can keep the ball down and not serve up many homers, he can be a pretty successful swingman/spot starter-type. He won't keep up the strand rate, but Nieve should be a decent option for now. Hopefully, when the Mets get a starter or Wagner back from injury, the Mets will consider Nieve for the bullpen. As a reliever, Nieve can sit in the 94-96 range and not have to go to breaking ball as often. The Mets need more relievers they can rely on to get lefties and righties out. Nieve could turn out to be a good snag for the FO.