Because this is the Mets' first year at Citi Field, and because of the randomness of teams' commemorations, the fact that this year is the 40th anniversary of the 1969 Mets has gone, to the best of my knowledge, unnoticed by the organization and media. It seems a little odd, especially given the hoopla of the '86 Mets' 20th anniversary three years ago. Nevertheless, the Miracle Mets were one of the most amazing teams in sports history. While their championship run wasn't quite as dramatic as their successors', or their team makeup as diverse, their seemingly impossible finish was one for the ages. 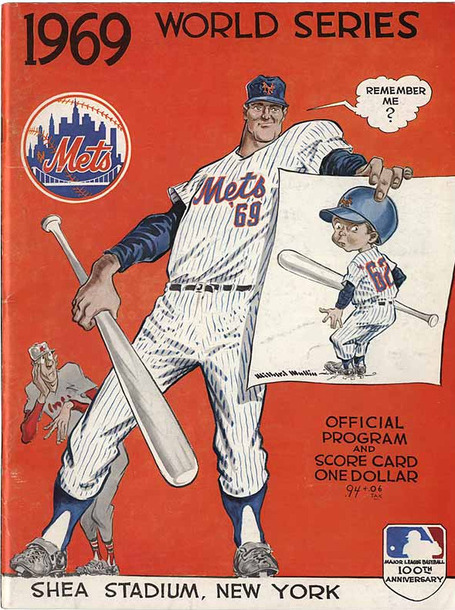 From 1962 to 1968, the Mets averaged a finish of about 56-105. They avoided finishing last in the ten-team National League just twice, and the only time they were over .500 was in 1966, when they started the season 2-1. Things were completely different in '69, as April was the only month in which they weren't over .500. The Mets were definitely overachievers: they finished 100-62, a full eight wins better than their Pythagorean record. Looking over their offensive numbers makes one wonder how they won games with any sort of consistency.

The '69 Mets finished in the bottom half of the NL in nearly every offensive category. Their paltry .242 team average would have been much worse had it not been for Cleon Jones' .340 mark (3rd in the league). Jones was their only everyday player with an OBP over .347, and Tommie Agee's 26 homers (which included the longest in the history of Shea Stadium) were nearly twice as many as any other player's total. No one on the team drove in more than 76 runs or collected more than 53 extra-base hits. Obviously, the Mets' success came almost entirely from their pitching.

The legendary duo of Tom Seaver and Jerry Koosman combined for a 42-16 record, 34 complete games, 11 shutouts, a 2.24 ERA, a 1.05 WHIP, and a 2.60 K/BB ratio. While not nearly as dominant, the Mets' other three starters all had an ERA under 3.50. The Mets also found great success from their bullpen: Ron Taylor, Tug McGraw, Cal Koonce, and Nolan Ryan each won at least 6 games. (Obviously the most important statistic!) The pitchers would also be the key in the World Series, allowing just 9 earned runs on 23 hits during the 5-game series.

After beginning the year 18-23, the Mets won 11 straight games, a franchise record which has been tied several times but never broken. Their sluggish start was followed by a remarkable 82-39 (.678) finish. Despite their prosperity, New York was behind the Cubs, who won 90 games for the first time since 1945, in the newly formed NL East for most of the year. The two teams' precipitous changes in momentum have famously been attributed to the black cat game on September 9, in which a member of Shea's feline colony walked out near the on-deck circle and stared at Ron Santo. Whatever the case, the Cubs went just 8-17 in September, and the Mets roared past them to finish a comfortable 8 games ahead.

In the first NLCS ever played, the Mets made up for mediocre pitching with their uncharacteristically hot bats. Hank Aaron went 5-for-14 with 3 homers and 7 RBI, but the Mets had no trouble as they outscored the Braves 27-15 in a three-game sweep. They went on to face Earl Weaver's dominant Orioles, who went 109-53 and finished 19 games ahead of the Tigers in the AL East. Had they won the World Series, as they were heavily favored to do, Baltimore would have gone down as one of the greatest teams in major-league history. The first game went as expected, with the Orioles winning 4-1 behind the masterful pitching of Mike Cuellar. In the second game Jerry Koosman outdueled fellow lefty Dave McNally, taking a no-hitter into the seventh inning. After Brooks Robinson tied the score with a single, Al Weis gave New York the go-ahead run with a 2-out single in the ninth. Ron Taylor finished off Koosman's two-hit shutout to even the series.

Game 3, the first Series game at Shea, was Tommie Agee Day. The Met centerfielder led off the game with a home run, then preserved the win with two spectacular catches. The first was a backhanded running grab of an Elrod Hendricks drive in the fourth, with two outs and Orioles on first and third. The second was a headfirst diving effort to rob Paul Blair, who came up with the bases loaded and two out in the seventh. These catches, along with Agee's home run, were the difference in the Mets' 5-0 win. In the fourth game, Tom Seaver shut out Baltimore in the first eight innings, but allowed two one-out baserunners in the ninth. Brooks Robinson hit a sinking line drive which Ron Swoboda dived for and made a tremendous catch. Frank Robinson tagged and scored to tie the game at 1-1, but Swoboda's play kept the Orioles from taking the lead. In the bottom of the tenth, Mets pinch-hitter J.C. Martin was hit by a throw on a bunt attempt, allowing Rod Gaspar to come around with the winning run.

Now owning a commanding 3-1 series lead, the Mets were poised to clinch an amazing championship on their home field. But the Orioles led Game 5 3-0 going into the sixth, thanks to homers from pitcher Dave McNally and Frank Robinson. In that inning, Donn Clendenon brought the Mets closer with a two-run shot, and in the seventh Al Weis, who hit just seven home runs in his career, tied the game with a solo blast. Swoboda gave the Mets the lead with a double in the eighth, then scored on a mishandled groundball. With two out in the top of the ninth, a flyball ironically hit by Davey Johnson was calmly handled by Cleon Jones, giving the Miracle Mets the 1969 world championship. A raucous celebration by the fans ruined the Shea Stadium surface, and the team was honored with a championship parade as well as an appearance at that year's Thanksgiving Day parade.