Some Myths Surrounding These Mets

Share All sharing options for: Some Myths Surrounding These Mets

Sean Green is bad or "the new Heilman": Green's 4.33 tRA is basically the same as Stokes' or Takahashi's and is above average. He's getting 56.2% GB, which isn't his usual absurd number, but is still great. His strikeout and walk % are in line with his career norms. The difference? He gave up 3 homers, the same number he gave up in all of 80 innings last year. The homeruns, coupled with some early struggles with command, made a few bad outings look like a breakdown. His ERA last year was already betrayed by the Mariners' terrible up-the-middle infield, making him underrated before the season. He can pitch the same way he has for the past two years and easily finish the year with an ERA <4.

J.J. Putz was good, then got hurt: J.J. Putz was damaged goods all year. No pitcher succeeds with 1 K:BB ratio. He just got exposed in his last three outings and finally accepted an injury that was already there.

Brian Stokes gets skipped over for lesser relievers: I've been guilty of this sentiment, but tRA suggests he's been just as good as Green in nearly the same number of innings. I still feel there were plenty of situations where he should have been brought in instead of Putz, and if he can improve his K% that tRA will be much prettier.

Jeremy Reed is a good defensive replacement in the outfield: Reed has a -1.4 UZR so far this season for the Mets. While I'd like to dismiss that as the insignificant sample size it is, he's -4.2 on his career, mainly due to his Juan Pierre-esque arm. Congrats Jeremy, you're a rangy corner outfielder with no arm, no bat, and -.2 WAR, again. At least he's consistent.

Jon Niese has been a bust so far in AAA: Covered here. He's done nothing since then to prove me right, but his season numbers in Buffalo to date only suggest it's impossible to pitch well on that godforsaken team, not that he's pitched poorly.

David Wright has been streaky this year: Sure, but anymore so than usual? Or any other player for that matter? His OBP hasn't dropped below .371. You be the judge: 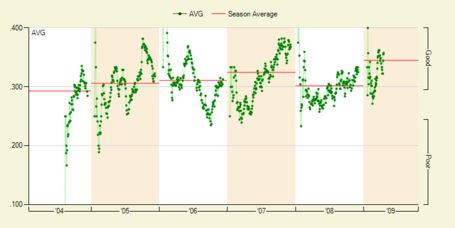 The Mets had good depth, but got unlucky with injuries: You really expect them to have a good third-string shortstop??? Sort of. Not good, but better than Ramon Martinez. For some, the quality of your AAA team is indicative of the quality of the Major League Team. Although that's four kinds of nuts, the Mets certainly have demonstrated it helps not to have a total bunch of scrubs on the farm, both for depth, and so you don't ruin two prospects who were considered to make the team out of spring training. Also, depth isn't just the back-up guys, it's also the people you trust from the beginning. Daniel Murphy was prematurely removed from the outfield after "the experiment failed" and Ryan Church got another injury. It's not that the Mets haven't just had bad backups the past two years, it's that they haven't had good complimentary type starters in the first place. Daniel Murphy is the kind of tweener you keep on your bench because he can fill multiple roles with the inevitable injury to the 38 year-old firstbaseman happens. Moises Alou. Luis Castillo. Manderson. Wow, trade for Adam Dunn because he's a power hitting outfielder who can fill in for Delgado? Great idea! Where have I heard that before?

HAHA I WAS RIGHT! Oliver Perez stinks!: Oliver Perez has become a great I-told-you-so moment for many of us, but that's gotten old, and we all have to accept he's with the team for another couple of years. Yes, it was stupid move. Minaya essentially gambled the whole rotation on the hope a historically erratic pitcher would repeat his 2007 season. Still, just as so many Mets fans decided he was once good, too soon have they condemned the contract as a failure. Oliver Perez was good as lately as two years ago, and he wasn't terrible last year. He's immensely talented and this year's version of Oliver Perez clearly isn't right, even for his standards. The velocity drop suggests something's physically wrong, whether it be injury, or conditioning, or whatever. There's still a chance he could come back and be decent, maybe even good. If he's right, the Mets shouldn't be pressured in keeping him out of the rotation for Redding or whoever. I own an Oliver Perez jersey.

John Maine's been good, not great: He's been bad, and I'm worried. He peripherals rank near the bottom of all eligible starting pitchers. He's not getting hitters to chase. I know he's coming off injury, and that I urged patience with him earlier, but the improvements since April have been modest, if existent at all. 6.09 tRA. Just sayin'.

Murphy's good. No maybe he's bad: or maybe he's just neither. His unlucky BABIP suggests he's not this bad, but he may not be the hitting machine. Lets this one play out.

The Mets need to focus on building for next year: There's plenty of time left, so I don't agree with all the doomsaying anyway. Still, this sentiment makes no sense.  What do these people want Minaya to do, trade veterans? He'd be fired for giving up. And who's left to trade? Church? I can't imagine that would be much more than a lateral move, as low as his value is. If building for next year means committing to prospects, then the one ML-ready prospect is already playing. Gee and Niese will have to wait for Fatty to be full. Anything else would just be needlessly rushing a player.