Share All sharing options for: More Thoughts On The Jeff Francoeur Trade

After reflecting more on the Jeff Francoeur trade and considering the perspectives of the defenders of the move, I'm more convinced it makes no sense. The main arguments for the trade seem to be following:

What about my second-favorite argument, "Ryan Church is just average." That's a statement not an argument. Yea, Ryan Church is average...and Jeff Francoeur is awful. Bobby Parnell is an average reliever...so let's trade him for Horacio Ramirez. Mike Pelfrey is a tall white dude from Ohio, so let's put on Bill Cosby sweaters and commit grand theft auto!

My favorite argument, a line straight from Minaya's press conference, is: "One thing we like about Francoeur is the amount of games that he plays." Hey if the Mets wanted someone who could play everyday, why didn't they just trade for me? I'm both: A. significantly worse than Ryan Church and B. not prone to injuries. The whole concept of replacement level is that a player, playing any amount of time, is better than Jeff Francoeur playing infinite amount of time. 100 AB for a good player and 400 AB for a bad player is always better than 500 AB for a bad player. I've changed some words in the original Minaya quote, but I think the meaning is the same: 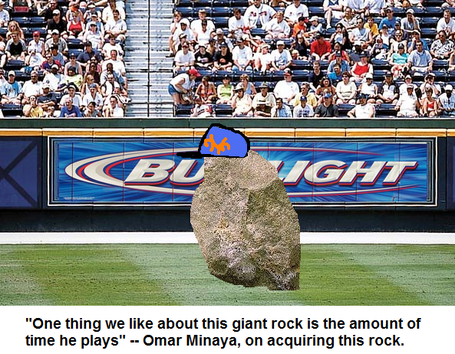 I remember an excerpt from Baseball Prospectus, profiling Jeff Francoeur before the season, that seems sadly ironic in light of Minaya's words:

If he cannot make these adjustments, even his above-average defense will not keep him on the field for 162 games on a team seriously trying to contend.

Yea, that's why the Braves benched him. They want to contend. That's why Francoeur was on the verge of playing 0 games a season (well, I guess not with teams like the Mets around.)

I'll skip number four for now and just dismiss number 5. I understand the need to make a change, nothing could be worse than what we've been watching right? Right? Oh, Jeff Francoeur. I don't care if Jerry Manuel didn't like the guy, a manager's whims shouldn't dictate personnel moves.

On the issues of Francoeur's upside, there's a glimmer of hope. If somehow, some way, Francoeur can get back to his 2007 levels of offensive and defensive production, he'll be a useful player. That happening, however, is a very slim chance. Maybe, maybe, if you really consider it a lost season, that is a risk worth taking. But I don't see that. Church is just too much better than Francoeur with a similar contract situation. The odds that Francoeur, a player openly against walking and taking pitches, suddenly improves are slim.

Surprisingly, despite the amount of outside criticism of this trade, the fans and local media seem pretty gung-ho. I suspect the reason might support my Sports media/News media comparison from the other day. Most Mets fans, and maybe Omar Minaya, remember the Sports Illustrated cover and the ridiculous dubbing of him as "The Natural". Mets fans remember Jeff Francoeur the fantasy baseball draft pick with the good average and the power potential. Omar Minaya, a great scout (not such a good GM), sees the athleticism. This team is built on myths. Frenchy's got more range, even though he doesn't. Santos should catch for defense, even though Baseball Prospectus rates him eight runs worse than Castro and he can't block the plate.

In that aforementioned Sports media/News media comparison I talked about Jon Stewart going on Crossfire and telling the hosts how their shallow, self-congratulating "debate" was playing into the strategies of politicians and misguiding Americans. Watching SNY's own Crossfire, Loudmouths, talk about this trade and drop a Mickey Mantle comparison and agree with Omar's assessment that Francoeur has better range, I wish I could go pull a Jon Stewart on them. Seriously, stop. All of this talk about potential, shake-ups, and athleticism is just noise.