Is Pelfrey's Slider Coming Around?

Share All sharing options for: Is Pelfrey's Slider Coming Around?

As Eric alluded to yesterday, Mike Pelfrey threw an unusually high number of bendy things in his dominating performance versus the Brewers (22 to be exact). Seeing Pelfrey confident in a secondary pitch is pretty exciting, as his lack of one has seemingly held him back from becoming a great pitcher. So was it in fact the slider which made a difference in yesterdays start? 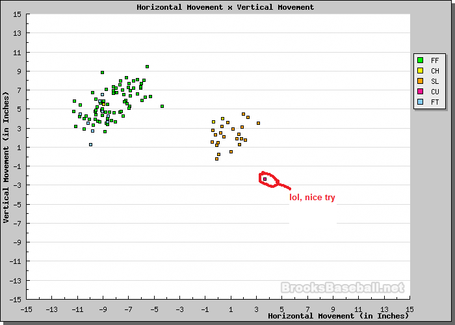 Pelf's slider, which usually has about 3.5 inches of vertical movement, averaged just 2.2 inches this time. Sliders generally sit somewhere between curves and fastballs in terms of movement, and these looked less like fastballs than usual. The benefit of Pelfrey distinguishing his secondary offerings from his fastball should be obvious. Probably more importantly, he threw it for 68% strikes, more than even the fastball. The full list of results on the slider reads as follows:

These results hardly suggest a dominating "outpitch," but the 7 foul balls support the possibility that Pelfrey's slider is becoming more different than his fastball, keeping hitters off balance. The 2 lineouts suggest a little luck, although I didn't witness the alleged liners and can't comment on how hard they were hit.

Also of note is that Pelfrey effectively used it to get through the lineup the second time around. The first time through, he only threw 5, 4 of which were directed at Jody Gerut. The second time around the order, he threw 9 and the third time the Brewers' faced him, he used 10. Craig Counsell didn't see one until he accounted for the lone aforementioned hit in the sixth inning.

Ultimately, it seems to soon to draw conclusions, although the early results seem positive, albeit a bit mixed. His strikeouts came mostly on fastballs, but the threat of a good slider certainly makes his fastball all the more deadly in pitchers' counts. Watch for the number and results of Pelfrey's sliders going forward , they could indicate a real breakout.