Someone We Can Beat: Mets 6, Nationals 2

Share All sharing options for: Someone We Can Beat: Mets 6, Nationals 2 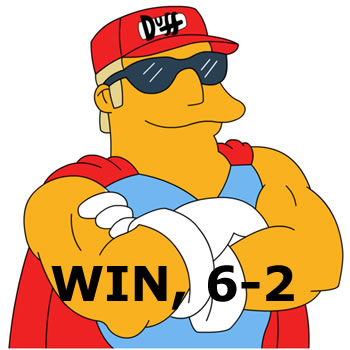 I'm actually in Washington, DC this week visiting my sister (and SB Nation HQ) so I get an opportunity to take in the sights and the sounds and the madness that is Rob Dibble's color commentary during Nationals games. Surprisingly, Dibble contributed something relevant and insightful during the post-game show. It was nothing earth-shattering, but he pointed out that the Nationals are doing their best to keep Livan Hernandez in the Mets' starting rotation, as the big guy is 3-0 against Washington this season and has allowed just three runs in 23 innings. Without the Nats to beat up on, Livan's 6-5 record and 4.93 ERA would be a 3-5 record and 5.95 ERA. These numbers don't carry a whole lot of weight on their own around these parts, but they're probably all that Omar Minaya and the rest of his baseball operations staff look at when evaluating pitchers.

Offensively, the Mets had a pretty good go of it against J.D. Martin, who was making his big league debut for the Nationals. The Mets cranked out eight hits and five runs over four innings, though all of the runs and seven of the hits came in the first two frames. Aside from a leadoff single by Jeff Francoeur in the third, the Mets didn't get a man on base until Francoeur connected for his first Met homerun in the ninth inning. Frenchy is 10-for-29 with a hit-by-pitch and zero walks since joining the Mets. His on-base percentage has surged from .284 all the way to .287 in those seven games.

Daniel Murphy knocked in a pair of runs with a couple of hits and also contributed another nifty double-play defensively. Angel Pagan scored two runs -- one thanks in part to Luis Castillo's clutch sacrifice bunt -- and drove in a third while Jeremy Reed predictably went 0-for-4 and saw just eight pitches (!).

Nice job by fxcarden@yahoo.com; his effort in the game thread embiggens us all.