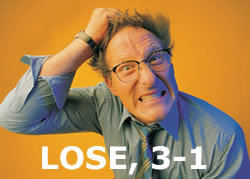 I don't think there's any question that the Nationals have a superior lineup to the Mets right now. I mean, the Mets fielded a lineup tonight that was even worse than this one. It's July 22 and the Mets had two non-pitchers who entered (and exited) the game with a .000 OPS. And for whatever reason, Jerry Manuel must believe there is a rule that prohibits a catcher from batting anywhere but eighth, because I can't fathom why Corey Sullivan and Angel Berroa might otherwise be hitting ahead of Brian Schneider. Things went from bad to worse when Luis Castillo, the Mets' second-best hitter, was ejected in the second inning for arguing a fielder's choice call at second base. At first I was relieved because I thought Jerry Manuel had been thrown out of the game, which I figured could only help the Mets' chances of winning. Instead, it was Castillo, who was replaced by Fernando Tatis, who has a .310 on-base percentage and is a lousy defensive outfielder.

Things went pretty much according to plan after that. The Nationals worked out a run in the fourth, and the Mets countered with an Angel Pagan little league inside-the-park homerun in the sixth. Jeff Francoeur dove for safety away from the path of a flying baseball, allowing Adam Dunn to reach base in the bottom of the sixth. Josh Willingham followed with a two-run homerun to give the Nats a seemingly insurmountable 3-1 lead, which must have looked to the Mets like a 15-1 deficit. The Mets threatened in the eighth, getting two runners on before bowing out pitifully. The ninth was uneventful and then the game was over, the Mets having lost their second in a row to the rival Nationals.

If you missed the Francoeur Failcoeur, I've included an animated GIF after the jump. Just give it a few seconds to load, then commence laughter. In another cruel twist for Francoeur, I was at the game tonight and can attest that, at least where Nationals Park is concerned, they do in fact show on-base percentage on the scoreboard, and yours is .289. 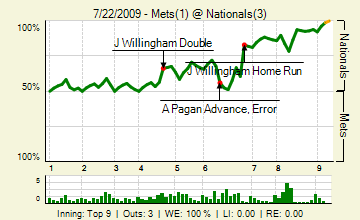