(promoted from the fanposts. --eric)

Since theres currently not much to the Mets-Phillies rivalry at the major league level I thought I'd stoke the flames down below with a John Sickels-style prospect smackdown. And there has been some Mejia v. Drabek talk here so I'll go with those two (though Brad Holt could probably fit right in). I'll also try to be as un-biased as I possibly can here. And hopefully this isn't considered stealing intellectual property: 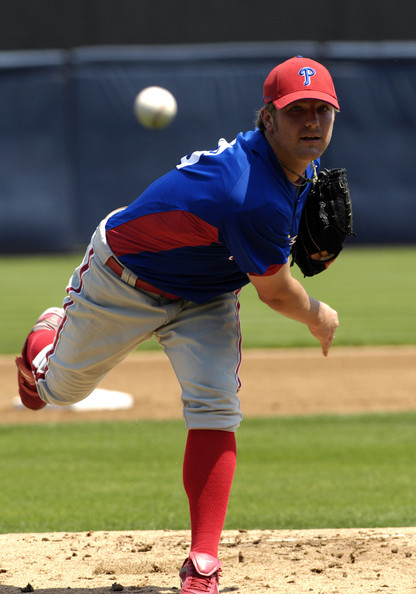 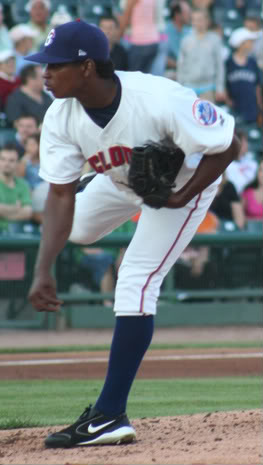 Mejia: Jenrry Mejia was signed as a relatively unknown non-drafted FA out of the D.R. in early 2007 for (believe this or not) under $20,000. He only began playing baseball at the age of 15, when his friends convinced him to join their daily softball games; obviously he was a natural. He is very mature for someone who isn't even 20 and his work ethic has been universally praised. Toby Hyde supposes its becauses "before signing, Mejia worked selling snow cones".

Drabek: Kyle Drabek was drafted by the Phillies with the 18th overall pick in 2006, out of the prestigious Woodlands HS in Texas and signed for $1.55 million. Considered a top-5 talent he dropped due to off-field issues which as the son of Doug Drabek all pointed to a bit of silver spoon syndrome. Being the son of a former Cy Young had its perks (Drabek worked with pitching coaches from a young age) but also had its drawbacks as he reportedly entered pro ball with quite an ego. He also carried his HS team for years and the overuse took a toll on his arm as he had to have TJ surgery in '06 after only six pro starts. However, since returning late last season many have noted Drabek's improved work habits and dedication. On the mound Drabek is often fiery which can work against him at times.

ADVANTAGE: Edge to Mejia; better makeup on and off field, less injury history and much less arm abuse as an amateur.

Mejia: Mejia was born on Oct. 11, 1989, is listed at 6'0", 162 lbs and he's a righty. He is a very good athlete with a smooth delivery (below), generating a great deal of strength despite his shorter stature. His fastball regularly hits 97+ mph, is deceptive, exhibits late sinking movement and has been known to hit triple digits; it is a true plus pitch. He also features a circle change with good fade and a hammer curve, both improving a great deal this season and showing plus potential. His pitching coaches have agreed that he mixes pitches well and scouts say that Mejia is not far away from possessing 3 plus pitches. He is still learning to command these offerings as they all move quite a bit but that movement also produces a very good amount of groundballs. Other than a recent finger strain that is not considered serious, he has no injury history to speak of.

Drabek: Drabek was born on Dec. 8, 1987, is listed at 6'0" (I've also seen 5'11'), 185 lbs and he's a righty. Drabek is an excellent athlete who stood out on both sides of the ball as an amateur. While a bit undersized, he has a strong pitcher's build and utilizes a relatively smooth drop-and-drive delivery (below). He works off of his mid 90's fastball which he can dial up to 97 mph and complements it with his notoriously nasty spike curveball which he throws in the high 70's with excellent command. He also throws a changeup but this is currently a show-me pitch. Drabek underwent TJ surgery following his '06 campaign but has come back extremely strong, seemingly solving his previous command issues.

ADVANTAGE: They are quite similar here; both very athletic, shorter righties with good mechanics, blazing heat and hard curves. You probably have to rate Mejia's FB better due to the added velocity and sink but Drabek's curve based on his command of the pitch. Both are still working on their changeups. Slight edge to Drabek based on more advanced secondary offering.

Drabek: Drabek entered 2009 with a career mark of 17-9, 3.57 with a 194/84 K/BB in 232 innings, translating to a 7.5 K/9, a 3.3 BB/9 and a 0.6 HR/9. However, in his first full season back from TJ Drabek is breaking out in a big way: He began the season by killing the Hi-A FSL with a 2.48 ERA and 74 k's in 61.2 innings. Like Mejia, Drabek was called up to the Double-A Eastern League at the start of June and has kept on rolling, currently sporting a 3.12 ERA. Drabek has had a bit more trouble with more advanced hitters, watching most of his major ratios decline following the promotion including his K/9 dropping down to 6.5. However, he's managed to avoid major trouble by keeping his walks down which is a theme following his surgery; however he shows much higher flyball tendencies than Mejia with only 44.4% groundballs in '09.

Mejia: Mejia projects as a fireballing front of the rotation starter with a chance to become a true ace if his curve/change continue to improve and he continues to keeps his walks under control. He seems to fit the same mold as Ubaldo Jimenez, though at a much younger age. His impressive performance at an incredibly young age especially considering his lack of experience gives good reason to believe that he could be on the fast track to stardom.

Drabek: Like Mejia, Drabek is a future front of the rotation pitcher and depending on his ability to incorporate that change he can range from a Brett Myers-type to a true ace in the mold of a Yovani Gallardo.

ADVANTAGE: This one is a draw; if everything works out these guys will both be studs, locking into pitching duels for years to come. Neither has much farther to come in order to reach his potential.

John Sickels rated both Mejia and Drabek Grade C+ to start 2009 but both were very conditional; Drabek coming back from TJ and Mejia because of age/inexperience. Both grades are likely to jump in the midseason reports. Baseball America's Mid-Season Top 25 had Drabek at #24 with Mejia seemingly fitting into the 25-30 range.

The verdict? Its close at this point; both are great athletes with similar stuff, Drabek has the slight edge in current skills, Mejia has the edge in makeup/intangibles. But if I can handpick one of them to begin my farm system I take Mejia and the determining factor here is age. Both pitchers are a handful of starts into their Double-A careers in the very same league, both putting up equally impressive stats yet Drabek is two years Mejia's senior. The kind of performance Mejia is putting up against very advanced hitters as a teenager, in only his second full season, only his fourth year playing baseball (!), its incredible. Now this is just a matter of taste, many might go for the slightly more advanced, less raw pitching prospect and try to cut out some of the risk involved. Either way, both pitchers are top of the line prospects who figure to shoot to the top of prospect rankings by years end.