Johan Santana was pretty bad tonight, allowing 15 baserunners in 6.2 innings while striking out just three. The Astros are a tough lineup for Santana, as they feature mostly right-handed free-swingers, led by guys like Miguel Tejada and Ivan Rodriguez -- that duo combined to go 4-for-8. Santana is still the Mets' best starter, but since his hot streak to begin the season he has been merely good, not spectacular like we were expecting.

The story of the game for the Mets was their ability to get on base and not get runners in. They pounded out thirteen hits and four walks but plated just four runs and stranded ten. They worked the Astros for 160 pitches over nine innings, but failed in most cases to get The Big Hit™ when they needed it. Every regular had at least one hit, so yay for that. That they reached base so often is astounding when you consider the on-base percentages of batters 4-8:

At this point I think the Mets would just be better off losing the rest of their games and drafting Stephen Strasburg next June after the Nationals fail to sign him this summer. Mike Hampton, whose two-run homerun off of Johan Santana helped swing the balance in Houston's favor, has a higher on-base percentage -- .343 -- than all but three of the Mets' starters tonight. That number will drop to two in a week as Angel Pagan continues to regress precipitously towards the mean. With the exception of David Wright and Luis Castillo, the Mets might be better off with Hampton at any position on the field in place of whomever the Mets currently have manning that spot.

For more on this game, check out James's Razor Shines dress down.

Jon Niese goes for the Mets tomorrow, so I guess we have that. 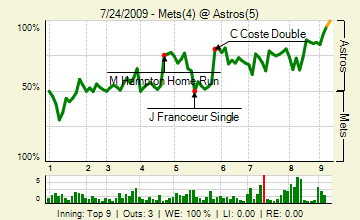