There were certainly many positives to take from Jon Niese's start yesterday. He controlled a lineup of mostly free-swinging right-handers, getting 12 groundouts to 5 flyouts. Some radar guns clocked his fastball as high as 95 mph. So I apologize for focusing on the one concerning element of his start, but his release points seemed a little odd: 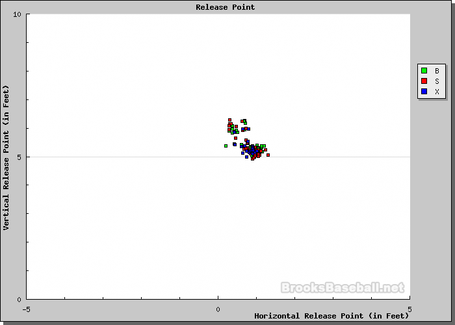 At first glance, it just seems a little erratic, with contact coming mostly from the inner-portion of the lower grouping. Grouped by pitch, however, a pattern is clear: 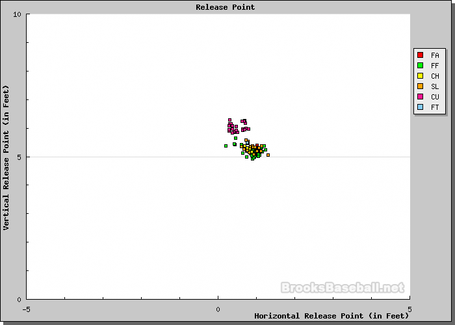 He clearly releases the curveballs from a higher release point than his other two pitches, the fastball and what presumably is a cutter. That could be a problem farther down the line if other teams' scouts pick up on it. Last night, however, I don't think it was problem, as the cutter, the pitch most prone to contact, resulted in three groundballs, a strikeout, and a weak pop out.

Overall, I was happy to see our young groundball machine succeed, but the release point is something to watch for.