Share All sharing options for: All Fired Up: Mets 7, Rockies 3 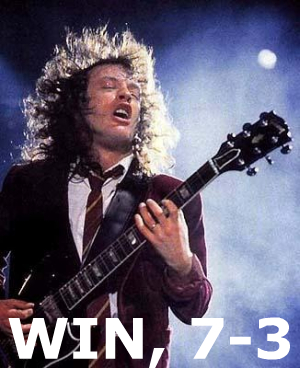 The good news for the Mets is that the epic fail that was the front office's handling of the Tony Bernazard situation will be softened somewhat by the team's come-from-behind win against the Wild Card-leading Rockies on Monday night. They got another passable pitching performance from Oliver Perez, who allowed three runs and nine baserunners in five innings, walking four and striking out five. He threw just 58.3% of his 103 pitches for strikes. Fortunately, Brian "Socks" Stokes tossed two scoreless innings of relief, followed by a scoreless frame apiece by Pedro Feliciano and Francisco Rodriguez. None of the Mets' relievers walked even a single batter, and no one took his shirt off and berated the rest of the team for being p!@#$ies, so all in all a good night for the bullpen.

On the offensive side of the ledger, Jeff Francoeur drew a walk! Okay, it was an intentional walk, but it's a baby step. He didn't swing at any of the pitches, so that has to be considered some kind of progress. He also pulled an outside pitch over the left-field wall for his eight homerun of the season and third with the Mets. He also didn't fall down or duck out of the way of any flyballs. A primo night for Frenchy.

Luis Castillo picked up a couple of singles and a walk, pushing his on-base percentage to .402. Not counting tonight's action, Castillo has hit .339/.433/.394 in 34 games since his game-costing gaffe against the Yankees on June 12. Maybe it'll last, maybe it won't, but for now Castillo is earning his money and is quite a ways down on the Mets' list of problems they need to address.

Omir Santos, Alex Cora and Angel Pagan did nothing, surprising no one in the process.

Fernando Tatis provided the offensive play of the game, swatting a pinch-hit grand slam in the bottom of the eighth to break a 3-3 tie. It was the eighth pinch-hit grand slam in team history and the first since Todd Pratt did it on 5/30/2000 against the Dodgers. Hawk Taylor was the first to accomplish the feat, doing so on 8/17/1966 against the Pirates. Steve Henderson, Tim Teufel, Dave Gallagher, Joe Orsulak, Todd Hundley and Benny Agbayani have also done it. 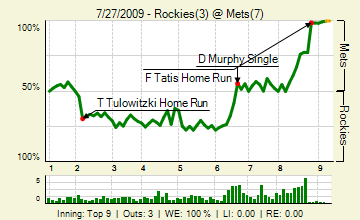 Nice job by Abstract NYC; his effort in the game thread embiggens us all.