Whether the Mets are winning or losing, there is one constant that makes a television broadcast enjoyable -- the announcing of Gary Cohen, Keith Hernandez, and Ron Darling. Nationally televised Mets games are usually dreadful because viewers are subjected to announcers not nearly as knowledgeable, insightful, and entertaining as GKR. As a tribute to our announcing trio, I present the Gary, Keith, and Ron Drinking Game. The Mets are causing fans to drink right now, so why not have some fun during broadcasts?

Standard drinking game rules apply, as you should take the appropriate number of sips from your beverage when something on the list happens. 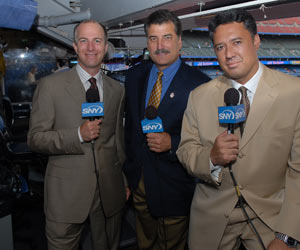