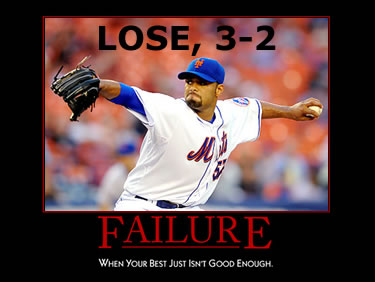 I'm not sure how often the best play of a game immediately precedes the worst, but it happened for the Mets in last night's eighth inning. After retiring Stephen Drew on a groundout to end the seventh, Pedro Feliciano stayed on to begin the eighth, allowing a leadoff single to center by Gerardo Parra. Sean Green was summoned to spell Feliciano and quickly showed everyone that he had nothing, hitting Justin Upton and then walking Mark Reynolds to load the bases. Miguel Montero, who earlier had launched a prodigious blast off the right-field facade for his tenth homerun of the year, pulled a Green offering to Daniel Murphy at first, who fired home for one out and scampered back to first to retrieve Omir Santos's return throw to complete the 3-2-3 double-play. Murphy pumped his blue-collared fist, congratulated Green on a job well done, and gave the ball back to his pitcher to finish out the inning. Green chucked the next pitch wildly toward the plate, and Santos, unable to corral it on one bounce, scampered after it while Upton glided home to give the Diamondbacks the 3-2 lead that would be their ultimate margin of victory.

Offensively, the Mets drew six walks and collected four hits off of Doug Davis but managed to score just two runs on solo homeruns by Murphy and David Wright. They stranded seven runners in Davis's six innings, including two in the fourth and three in the sixth. The latter began with Wright's blast, and sprinkled around outs by Jeff Francoeur and Omir Santos, Fernando Tatis doubled and Murphy and Alex Cora each drew walks. Jerry Manuel made the proper move by pinch-hitting for Livan Hernandez with the bases full and the game tied 2-2. Manuel went with Angel Berroa, who is terrible, and I guess Manuel's only defense is that Berroa is righty and Davis is lefty. He could have gone with Cory Sullivan, who is also terrible but probably not to the extent that Berroa is. He could also have gone with Jeremy Reed, who has only seven at-bats against lefties this season but nevertheless has four hits -- two more than Berroa has in his 18 total at-bats this season. Sullivan was probably the better choice, but not obviously so. So Manuel went with Berroa, who grounded the first Davis offering to short to end the threat. The Mets would have just one baserunner over the final three innings and never really threaten again.

Now's as good a time as any to ask the obvious question: Why is Nick Evans in Triple-A? He would've been the obvious pinch-hit candidate in the sixth, and, while he was by no means assured of coming through in that situation, he'd have been a much better choice than Berroa, Sullivan or anyone else. Reed is the late-innings defensive replacement, so why exactly is Sullivan still with the team when Evans has the brighter future and is actually the better player right now? Roster management fail.

I couldn't help but laugh sadly to myself when the SNY broadcast team went on about how Davis had been a ".500 pitcher" (Keith's words) from 2004 through 2007, when he posted 12-12, 11-11, 11-11, and 13-12 seasons in succession, as if implying that Davis bore the brunt of the responsibility for his records those years. Not a moment later, Gary remarked at how Davis's record had taken a turn this year -- just 5-10 so far -- but that it was hardly his fault because the Diamondbacks' offense gave him very little run support. So frustrating that he seems to get that pitcher wins and losses are really team stats, yet won't hesitate to pray at the alter of those same wins and losses when evaluating any starting pitcher in any other context.

Oliver Perez and Max Scherzer square off at 7:10pm tonight at the Citi. 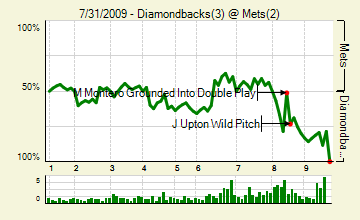